Peer-to-peer car rental startup RelayRides has grown pretty aggressively ever since it enabled users to rent their cars from wherever throughout the U.S. Now it has cars listed in 1450 cities in the U.S., including all 50 states. But what do users do if they live in a place where there are no available cars around?

Starting today, users who find themselves in that predicament will be able to share their interest in renting a car on Facebook. The new feature, which RelayRides calls “Renting Social,” is designed to help increase supply in markets where there’s a limited number of cars listed.

As part of the new feature, RelayRides users can advertise their need for a car on Facebook, including the duration that they need to rent one, as well as the location that they’re looking to rent from. Once shared with contacts on Facebook, the listing will appear in their news feed. If someone with a car nearby sees it, that person will be able to instantly respond by listing his vehicle. And once that’s done, the user who initially posted the request will be notified. 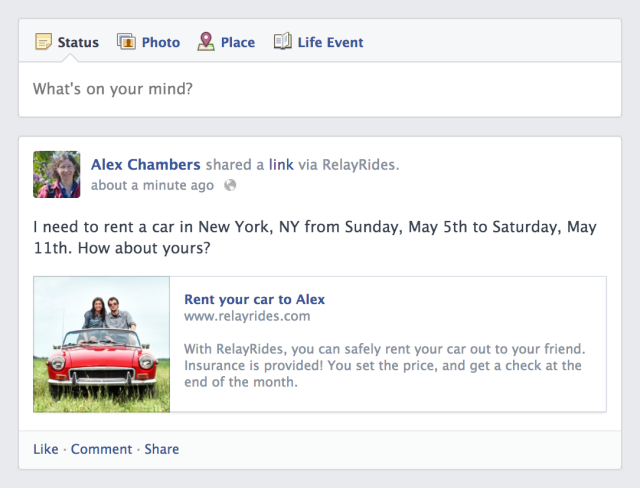 The idea is for RelayRides to help boost the number of cars wherever there’s demand. But to some extent that flips the usual marketplace model on its head. Usually marketplaces work and demand is built where there’s already an abundance of supply. With “Riding Social,” RelayRides is trying to boost supply by first showing demand in underserved areas.

While Renting Social is designed to raise awareness of RelayRides among car owners who aren’t yet users, the feature can also be used to improve discoverability in markets where supply is abundant. By sharing on Facebook, they can be connected to cars nearby through the company’s “carcierge” service.

Thanks to a growing number of listings, RelayRides has seen a pretty drastic uptick in the number of rentals across its platform. Its transactions have increased 300 percent over year-over-year, and are 45 percent month-over-month from February to March. As it sees users extend the length of rentals, it’s also benefiting from people renting cars for days and weeks as opposed to just a few hours.

CEO Andre Haddad sees the increase in the rental time as primarily due to a growing adoption of regular users who are looking to use RelayRides in the same way they use traditional rental car agencies. Today, he says, the average rental is about 2 or 2.5 days. To support that, RelayRides has also added the ability to rent cars monthly, in addition to hourly, daily, and weekly. As a result of all these things, the number of rental reservation hours has increased 750 percent.

RelayRides was founded in 2010, and has raised funding from Google Ventures, August Capital, Shasta Ventures, and GM Ventures. It recently partnered with GM to make car rentals more accessible through OnStar integration, but the majority of rentals still occur through the handoff of keys between users.