Palo Alto-based Wanderable, a 500 Startups-backed company designed to help couples create wedding registries filled with “honeymoon experiences” instead of just gifts, is now available on the iPhone. With the new app, a couple can create their registry on the go, view and track the gifts they receive, and then snap photos to accompany thank you notes which are sent out directly from the app itself.

The startup was co-founded by Jenny Chen and Marcela Miyazawa, former Stanford computer science classmates, as well as friends. Miyazawa says she was inspired to create the service after getting married herself, and being stumped as to what to add to her registry. “I had already been living with my boyfriend then – my husband now – for several years. I couldn’t think of anything to register for – I don’t need plates, I don’t need cutting boards, etc.” she adds. 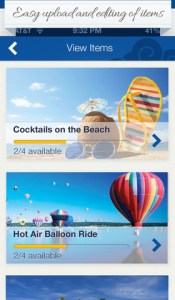 Miyazawa ended up using HoneyFund to build her registry online, but felt the experience was less than ideal. Others in this busy space include sites like TheHoneymoon, The Big Day, HoneyLuna, Honeymoon Wishes, Traveler’s Joy, RegistryLove, and NewlyWish, for example.

“It’s such a great concept, but it’s so poorly done on other websites,” Miyazawa explains. “Other sites either take such a big percentage of your funds – from 8 to 10 percent – or, if they’re free, they have Google Ads…and it felt terrible to have ads on the registry,” she adds.

Instead, Wanderable takes only 5 percent of transactions on its site, split between the givers and the couple. The site finds other ways to generate revenue – such as through its $9.99 gift boxes that allow guests to package their “experience gift” in a box covered in pretty, handmade wrapping paper. The box contains a note from the wedding guest, as well as details about the experience purchased – like cocktails on the beach, excursions, dinners out, and more.

The company also offers concierge services, and is now working with resorts on private label registries, too. This would allow a hotel to host its own branded registry. Wanderable has partnered with BedandBreakfast.com, and Miyazawa notes that a large, undisclosed resort in Hawaii is currently piloting the private label option, too.

In terms of the newly launched mobile app specifically, Wanderable for iPhone offers a scaled down version of the registry, allowing couples to add and edit items from their handheld. It’s not limited to “experience” gifts either – but could be used to register for anything the couple wanted, including big-ticket items which guests could choose to go in on as a group. 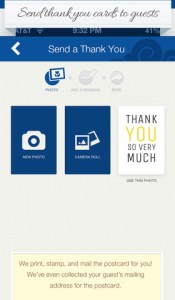 However, the standout feature of the app is the “thank you” note option. Using the iPhone’s camera, the couple can take a picture of their gift or of themselves enjoying the activity the guest had helped fund. That picture is then turned into a personalized thank you card which is mailed out (that is, snail mailed!) to the gift giver. Currently, Wanderable is using the Sincerely API for this, but hopes to bring this feature in-house in the future.

Since its debut last January, the company has attracted “thousands” of users to its service, but Miyazawa declined to provide details on exact numbers, transactions, or growth.

Wanderable currently has a small (quarter of a million) seed round, funded by 500 Startups, as well as angel investors including Elliot Loh, Amos Elliston, and others.

The new iPhone application is available for download here in the Apple App Store.