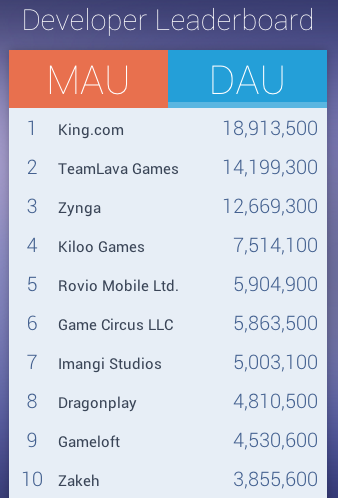 While Apple’s app store and Google Play have long had leaderboards for the most downloaded and lucrative apps, there hasn’t been that much transparency around engagement after the download.

Heyzap, a Union Square Ventures-backed startup that runs a mobile gaming network, has stepped in and decided to build one. The startup, which was founded about four years ago and originally centered around Flash games, has moved onto mobile platforms (pretty much like every other game developer over the past few years). They have an app on Android with about 10 million installs that lets gamers add friends in their favorite titles and share tips and badges.

From those 10 million installs, they say they’ve been able to gauge the size of different developers’ active userbases. So from that, they’ve launched Heyzap Trends, a live leaderboard that estimates active usage. The standard iOS and Google leaderboards mainly focus on downloads or installs and then revenue over specific time periods (although Google Play’s rankings are said to factor in some engagement data).

They say they get play data for about 80,000 games on the Android platform, which is shared by people who have the Heyzap app and are logged into it.

Even games that aren’t integrated into Heyzap’s network get their play data recorded by this, said co-founder Immad Akhund. That’s partially because of Android’s open nature.

“The openness of the Android OS is allowing for more unique and interesting experiences for users,” he said in an e-mail. “I think this is going to be a trend going forward as mobile apps reach maturity and differentiate through deeper experiences hooked in to the OS layer.” (As a sidenote, Facebook’s Home app is a perfect example of this openness.) 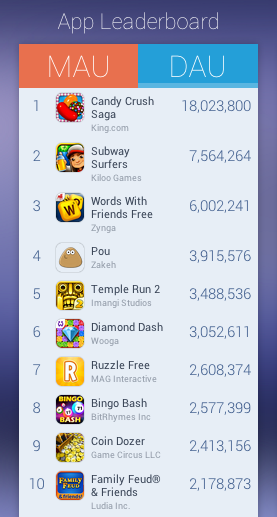 Just to make a note, Heyzap’s numbers are non de-duplicated. That means if the same person plays more than one game from a single developer, they’re counted more than once. It’s not an unusual metric: even when Zynga reports daily actives in its quarterly earnings reports, those figures are not de-duped. Instead, they report a separate metric called “monthly unique users,” that doesn’t double count people.

Akhund said they might do non de-duped counts in the future. We “…felt for now it made sense to count the user twice as it is double the engagement and monetization opportunity,” he said.

Heyzap is backed by $8 million in funding from Y Combinator, Union Square Ventures, Naval Ravikant, Joshua Schachter, Christina Brodbeck, Founder Collective and Qualcomm Ventures. This “Trends” project faces off against other companies like Sequoia-backed Onavo, which is trying to do a “Quantcast for mobile apps” via active usage data they collect through mobile data compression apps. They are for now, iOS only. Heyzap Trends, in contrast, is games only.