Google chairman Eric Schmidt today denied that there is any tension between his company and Samsung, the world’s biggest handset maker and the biggest OEM partner for Google’s Android mobile OS. “They have hundreds of millions of phones coming out on Android and I don’t think you will see much of a change there,” he said of the Korean handset maker, during an interview at the D:Dive Into Mobile conference. “Obviously we want to see competition but the Samsung relationship has turned out to be a defining one.”

During the last Mobile World Congress in Barcelona, there were reports, citing sources close to the matter, that Samsung’s size and “heft” were worrying Google. “We spend lots of time with Samsung and I can confirm that this is not correct,” Schmidt said today. 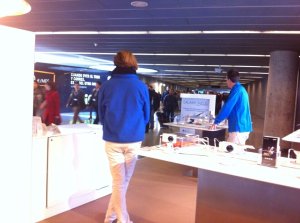 While Google played down its presence at in Barcelona in February compared to years before (no Schmidt, no Android stand, no pins), Samsung was near-ubiquitous, including stands in many of the exhibition halls and even in the subway station near the venue.

Schmidt’s comments came in the context of other questions about Android competitors, including the one now owned by Google itself, Motorola. On this he was predictably confident, but also realistic:

“Motorola has a new set of products I’ve seen that are phenomenal, but they are in a tough space… [but] what you see in this next generation of technology is very impressive,” he said.

Nevertheless, with companies like HTC struggling for critical mass on the platform, and more OEMs looking for ways of differentiating themselves with customized launchers (like Facebook Home) or forking altogether (as in the case of the Kindle Fire tablet from Amazon, or many “Android” handsets in Asia), there remains a question about how those Android handset makers who are not Samsung will eventually make decent margins on their hardware businesses.

“Those smartphone makers are capitalists,” he said. “I’m pretty sure they will all be making money. If you tell me there is a billion consumer opportunity people will make money on that, [just] in different ways.”

One way might be with aggressive pricing across a wide range devices.