At the beginning of the month, we broke the news that Google’s acquisition, BufferBox, was planning on setting up shop in the Bay Area. Today, it’s clear that this wasn’t just a plan, as its co-founder proudly shared the first U.S. BufferBox location, the nicely trafficked Coffee Bar in San Francisco.

It’s no surprise that BufferBox will be setting up these shipment lockers in places that get high traffic, as it’s a more convenient experience than going to a post office or a shipping hub. The location, in the Mission District of San Francisco, is a place where people could potentially route their packages to, knowing that they’re going to visit for a cup of joe at some point in the day anyways. BufferBox gives you a single-use address and locker number to have your items delivered to. Since worrying about packages being left on your doorstep, or, worse, missing the package delivery altogether is a pain, picking something up from a place that you go to every day on your way to work is appealing.

BufferBox has only been available in the Toronto area until now, leaving people wondering what Google would do with it once it acquired the company. Business went as usual in Canada in the past few months, and the team is clearly moving forward in California. The new San Francisco option is not available on their site, but I’ve reached out to the team to find out when it would be. 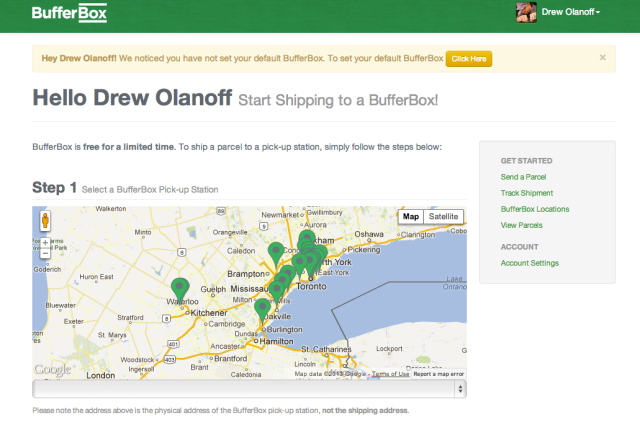 Another Y Combinator company, Swapbox, recently set up its own delivery lockers in San Francisco’s Nob Hill section, with plans to move fast and furious to install more. The race is on for these two companies to spread themselves out in locations that get a lot of foot traffic. On the BufferBox site, their services are currently listed as free for a limited time.

You have to imagine that places like Starbucks are ripe for BufferBox placement, as it’s somewhere that people go continually throughout the day. Additionally, Google could easily integrate its new Shopping Express service into BufferBox’s offerings once more locations start popping up.