Two explosions rocked the Boston Marathon, causing widespread injuries. The earliest reports and images began flowing in from social media. According to a Boston Globe tweet, “dozens of people have been seriously injured”. Below are first-hand reports and images as they come in, including live social media updates from official sources. WARNING: content is graphic.

NBC News: A law enforcement official says one of the two people killed in today's explosions was eight years told.

Obama says we still do not know who did this or why; U.S. will get to the bottom of what happened in Boston #breaking http://t.co/dBoSK9Bcv4

–Update (3:20 PT) – A large google spreadsheet of citizens offering places to stay and wi-fi to reconnect with loved ones is big and getting bigger

RT @globegideon: Some of 64 injured in Boston #Marathon blasts have had limbs amputated, hospitals report. #marathonbdc

President Obama has been notified of the incident in Boston, administration in contact with state and local authorities. #BostonMarathon

My photog @JohnHammann and I are safe. But, we were very very close. Saw people on the ground with limbs missing. Awful.

–Some of the images are quite graphic. See one of the injuries here.

–Here’s video of the explosion

–Google has set up a link to a person finder

If you have info about those in the #bostonmarathon or looking for someone,please visit the Person Finder to add data http://t.co/uoKE5igg2t

–A reddit community had been compiling live updates, but incoming traffic has aparently overwhelmed reddit (it is now back up) 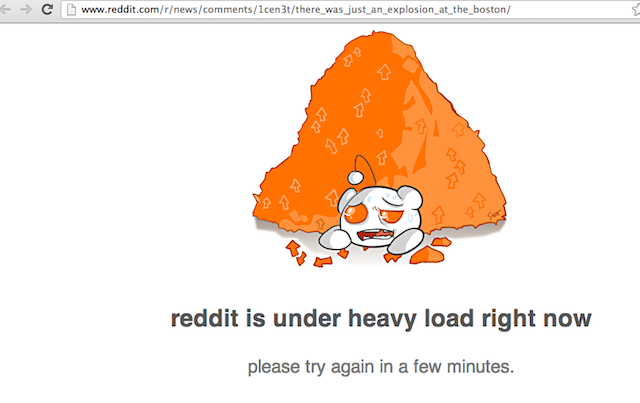 Register here to find loved ones. Also - make sure they know you're safe. http://t.co/YGUp5rulhm

–In all of the chaos, brave citizens risked their safety to help one another. Wherever there is evil in the world, there is also good:

Asking what's wrong with world? Watch blast vid. Notice how many run towards it. To help. That's what's right with world. #bostonmarathon

Note: We’ll be gathering infromation from the social media feeds we use daily. Please limit conversation to news about the event