BitTorrent, the content sharing and distribution network with 170 million monthly active users and 85 petabytes of content, continues to roll out more tools for artists and consumers to turn to the service for all their music, video and reading needs. Today BitTorrent is turning its attention to the mechanics of downloading. It is putting its Surf Chrome extension — which effectively turns the browser into a desktop client for downloading content — into beta and adding some new features, including Firefox support and a new recommendation engine.

BitTorrent is also taking the opportunity to tie Surf in closer with how it plans to monetize the service more in the future.

Included in the recommendation engine will be the content bundles that BitTorrent creates with artists. When a user searches for and starts to download a particular piece of content, other relevant artists, who have placed their work into BitTorrent bundles, will start getting preferential position and appearing near the top of the recommended list. This is something that BitTorrent says will be a hallmark of one of their newest bundle launches, from the DJ Pretty Lights based around his set from this past weekend’s Coachella music festival. As with the book bundles featuring best-selling author Tim Ferriss, Pretty Lights is a safe-ish bet for BitTorrent to try out new things. The musician is one of the most-downloaded artists on the network, with over 5 million downloads in 2012. (By comparison, Death Grips got 34 million; Counting Crows (!) nearly 27 million and DJ Shadow 4.3 million.) 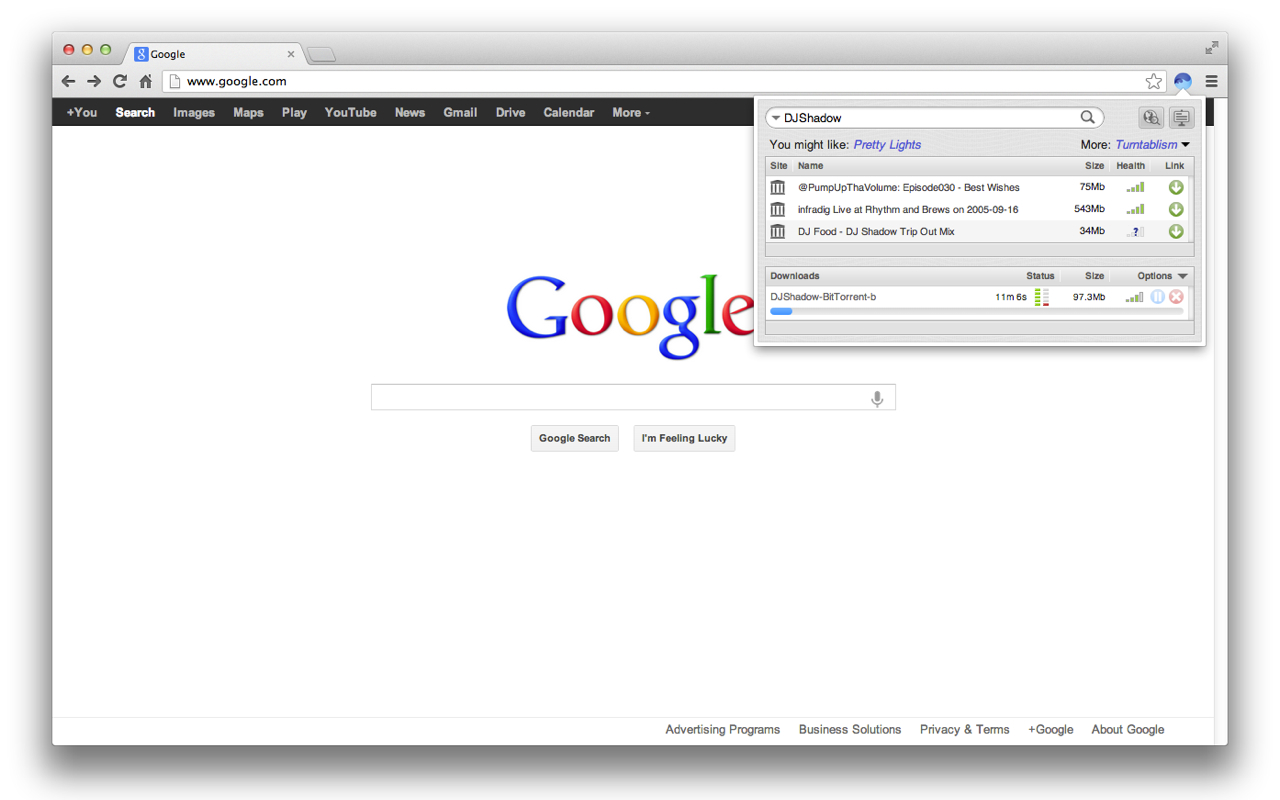 BitTorrent, as it continues on the road of distributing legal content further and further from its roots and original reputation as a hotbed of illegal activity, has been putting quite a lot of effort into figuring out how best to package and deliver content bundles as the cornerstone of their business. They have offered advertisers, for example, the chance to include material of their own in the mix, in the case of a DJ Shadow bundle last year, while still keeping them free to artists to upload and free for users to download. A spokesperson for BitTorrent refers to the bundles as a “series of experiments,” with the goal being “a more sustainable distribution model for the Internet’s creators and fans.”

And those experiments are set to continue. “There are a lot of possible revenue models for BitTorrent bundles, and we expect to share more on that at a later date,” the spokesperson says.

The Surf plug-in, which also offers users a status window to monitor the progress of a download, first launched as a service in alpha in January, as a product out of BitTorrent Labs. As for other browsers beyond these two, “No timing announced today for the others, but we are looking at them,” said the spokesperson.