Anyone who has had a computer and a connection to the Internet in 1999 quickly knew what it felt like to find any song that you wanted, and then listen to it almost immediately. Well, the immediate part wasn’t true, since you had to download the MP3s, which usually took quite a bit of time on a dialup connection.

Since Napster, and it getting sued into oblivion (and then acquired for bits and pieces by Best Buy), streaming music has become the technology du-jour. Napster co-founder Sean Parker is now heavily involved with Spotify, which realized the “any song, any time” dream that Napster introduced us to. Today, a service called Napster.fm popped up, and it’s a web-based music player that has some interesting social features. The best part about it is that it’s open source and can be set up by anyone, in case it ever gets shut down.

Its creator, Ryan Lester, is a student at Carnegie Mellon who is “taking a few years off to work at SpaceX and do other stuff.” A part of the “other stuff” is clearly Napster.fm. How does it work? Well, after going through the quite FAQ (Lester obviously has a sense of humor), he explains that the service is dependent on “minor inefficiencies in YouTube’s piracy-detection system.” Regardless of where the tracks are coming from, the service actually works. 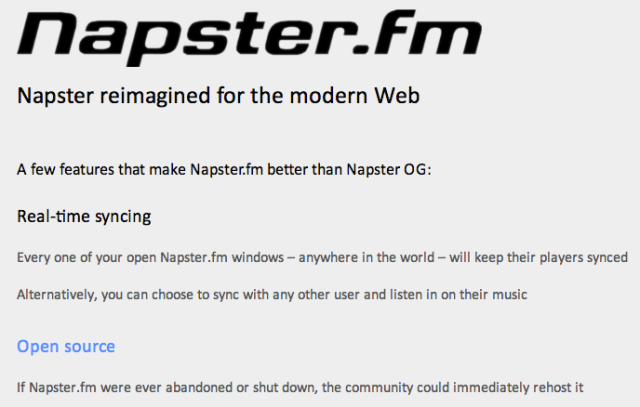 As soon as you visit the site, the song that’s queued up for you is “Never Gonna Give You Up,” which is long-forgotten-once-hated “RickRoll.” The search interface is pretty basic, but once you start adding songs to your playlist, you can share them with friends who have also signed up for the service. Once you’ve done that, you can sync up and listen to exactly what they’re listening to. The “Discovery” tab shows you what everyone has listened to, if you’re in the mood to find something new.

You can even create a group of friends that are using the service and someone can play DJ and decide on which tracks will come up next. Sure, these are some of the things that you can do on other services, like Turntable.fm, but the Napster.fm interface is stripped down and basic, not sucking up a lot of resources. The other nice part is that there isn’t a desktop client to worry about, as is the case with Spotify.

What you’re listening to will be synced over all of your browsers:

It’s nice to see that Lester has brought back some of the old Napster features like “Hot List,” which lets you browse your friends’ libraries, as well as the chat and transferring songs to friends. It doesn’t hurt that it’s free and has no playback limit. Will it stay around? It’s hard to say, especially if it completely relies on a YouTube hole, but if the site itself were to get shut down, Lester has put all of his work on GitHub so that anyone can get another version going immediately.

If there’s any doubt as to whether Lester is having fun with the project, all you have to do is read this FAQ entry:

Will I be sued for using this?