Last week, Backed or Whacked look at a trio of wristbands that can hold a buck, make a bun and prevent a burn all without any assistance from a successful mobile app platform. But as a host of digital fitness products has shown, the usually limited interfaces of fashion accessories can be boosted by pairing them with smartphones. 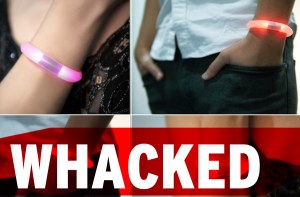 Whacked: Embrace+. The Embrace+ could be described as a smartwatch for people who would rather rave all night than know what time it is. The transparent band, to be available in three shapes, has embedded LEDs that illuminate in different colors depending on the kind of notification being received.

With 13 different services and alerts intended to be supported out of the gate, there’s a good chance that those with an active social (networking) life will find their wrists becoming a rainbow of a light show throughout the day. And if the unlimited colors aren’t enough for you, the band also offers options for the number and duration of blinks, light brightness and speed interval and whether to include a subtle vibration.

The Embrace+ campaign attracted interest, with nearly 1,500 backers ponying up nearly $84,000, but that represented less than half of its ambitious $220,000 goal. Almost immediately after it ended, the team vowed a relaunch at a new web address, but so far clicking it turns up a generic web-hosting admin page. 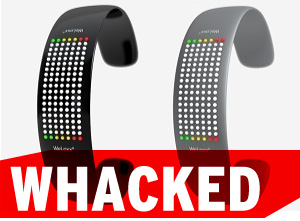 Whacked: WeLoxx. Those who have pursued the quantified self only to discover there is too much of their self to quantify for their liking have access to a whole battle of the bands to help them with calorie expenditure. These include offerings from Jawbone and Nike with more on the way from Fitbit and Samsung. But at CES, much attention was lauded on a connected utensil called the HAPIfork that keeps track of how often you shovel food into your mouth, coaching you to eat more slowly.

That’s the basic idea of the WeLoxx, which moves the sensor from the fork to the wrist and thus enables it to work with spoons, chopsticks or your grubby bare hands. The project, originating in Bern, Switzerland, proposed two different models for the WeLoxx — a more watch-like design, the WeLoxx 300, and band-like design, the WeLoxx 900. Both featured an array of traffic lights to signal how fast you’re eating. For the near term, though, we won’t be loxxing, as the campaign collected only $584 from six backers en route to missing its $80,000 goal. 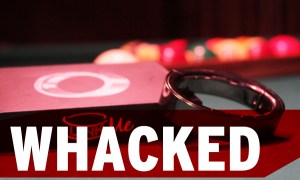 Whacked: LinkMe. The LinkMe is a paradox. On one hand, or perhaps wrist, notification bands are supposed to be unobtrusive. The Embrace+’s light show may even be pushing it, but at least only you know how to decode its glowing rainbow.

In contrast, the LineMe wraps an LED billboard around that hand-joining joint. The advantage is that the band can display specific messages instead of just notification lights, possibly saving you more trips back to the 5″ LTE-packing behemoth weighing down your pocket. On the other hand, it could enable anyone close enough to your resting arm to read the digital sweet nothing intended just for snookums. The creators, New Yorkers Matt and Colin, would counter that you can set up a system of abstract characters to get back to the Embrace+ level of abstraction.

The LinkMe would last about two weeks on a charge and, like the Nike FuelBand, the LinkMe can default to a time readout when nothing private is being broadcasted to it. One month in, the campaign has raised only about $13,000 of its $100,000 goal.