Y Combinator grad ReelSurfer is an instant video editor, born out of its founders frustration of trying to find clips, quotes and scenes from their favorite movies on YouTube and other video sites. The process is probably familiar to you: Search for clip, don’t find it; if you do find it, it’s part of a larger clip, so you have to download, convert and clip the video yourself.

So, ReelSurfer developed the tools to let you clip any video from any website and share it with your “homies” and “homedawgs” over the Facebooks, Twitters and more. Or at least that’s the eventual goal. In truth, ReelSurfer’s design has been less-than-perfect and it hasn’t really allowed you to clip any video. Yes, YouTube has a lot of videos. Like a lot. But that’s not the only media player out there.

Today, ReelSurfer has officially unveiled a redesigned interface, which looks a whole helluva lot better and makes it easier to navigate and makes its URL search box even more prominent — as it should be.

The new interface still enables users to make video mashups or reels of multiple videos and link back to the source so that viewers can check out the full clip if they so choose. However, the new interface does allow for improved search and video discovery, so that users have a better chance to see if the clip they want to make has already been clippity-clipped by someone else. Time saving, my friends, time saving.

Yet, the biggest addition would have to be that ReelSurfer the now allows users to use its bookmarklet to clip videos from both Brightcove and Ooyala, in addition to YouTube and Vimeo. Who cares? Well, that means you can now clip and share videos from ESPN (which uses Ooyala to power its billion-plus video streams) and The New York Times, which uses BrightCove. [You can see the full list of supported sites/media players here.]

Since it’s been a little while since we’ve heard anything from ReelSurfer, the startup also pulled back the curtain a little bit to give some examples of who is using its service and how. TedXTeen, PopSugar are using it to create and share viral, social media-friendly clips, along with The Counting Crows(!) and Reuters. More on the latter here. 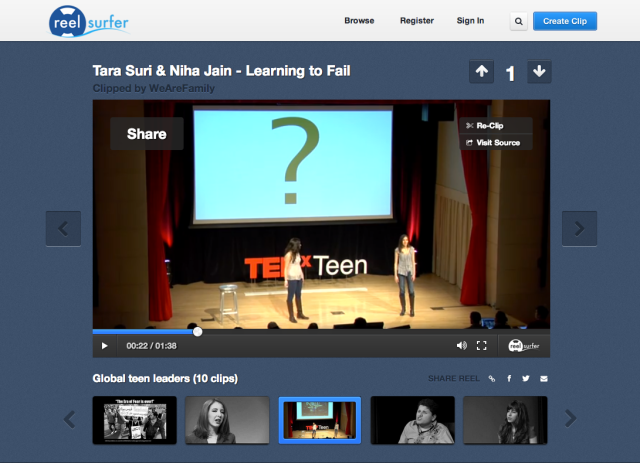