We have not seen a hell of a lot of innovation in the ticketing space for a while. Granted, Eventbrite has done some great things in this arena, but Amiando, for instance, seems to be withering on the vine now that the founders have long gone. So it’s interesting to see brand-new startup Tito.io have a crack at this issue after a stealth/private beta in which it claims to have already processed over $1 million in ticket sales. It now moves into public beta.

So far Tito has notched up a number of tech-oriented conferences as testers. These include JSConf Family, JSConf US, Robots Conf, Elabs, Nordic Ruby, WebSummit, F.ounders, RightScale, RightSignature, Exceptional Software, &yet and the Realtime Conference.

The platform boasts that it is faster, simpler, more customisable, has iOS Passbook integration, uses Stripe or PayPal and integrates with conference aggregator Lanyrd.

Campbell correctly points out that “in the case of JS Conf, CSS Conf and Node Conf, these guys run software events for the people behind software development in Facebook, Google, Twitter, Apple and more. That’s the most demanding group of people in software.” He does admittedly have a point.

Although Campbell built Tito with Paddy Cosgrave (founder of the Web Summit conferences) when the latter was still a developer, Cosgrave has since left to pursue his conference business, which will now also use Tito.io as a ticketing platform. 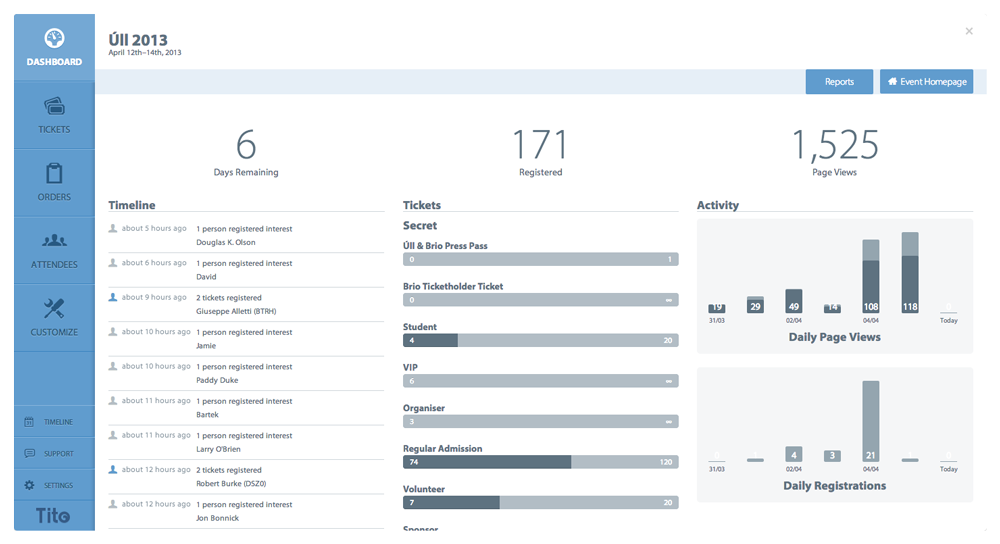