Facebook Home, the new Android-based launcher that puts the social network and its messaging, photo and other services front and center on a user’s mobile device, is now available for download on Google Play for a limited selection of Android devices: HTC One X, HTC One X+, Samsung Galaxy S III and Samsung Galaxy Note II. This comes after earlier today Facebook updated its Facebook Messenger Android app with Chat Heads functionality, as well as its basic Android app with Facebook Home support.

Facebook debuted Home earlier this month. At the time it announced that it would be available on Google Play from today. Home is also coming pre-installed on the HTC First: this has been available on pre-order since April 4 on AT&T, and is officially on sale with AT&T from today (with a little promotional help from Facebook itself). The HTC First will be hitting France and the UK this summer via France Telecom’s Orange and its EE JV in the UK.

You can see our full review of how Facebook Home works on the HTC First here.

Home is Facebook’s strongest swing yet at mobile, and points to the company’s ambition to be a platform for all of your communications, ever present, no matter what else you are doing: “the next version of Facebook,” in the words of CEO Mark Zuckerberg. (Other moves, such as this quiet acquisition of stealth startup Osmeta, point to how this may extend beyond just Android, too.)

This means that, while Home is still limited in how many people can use it — just the HTC First, along with four other devices (albeit including two handsets from the world’s biggest smartphone maker, Samsung) — and is limited in its functionality (no ads… yet), if things go to plan for Facebook, this is just the beginning.

In that vein, we’ll have to see what more Facebook does to promote the new app to drum up usage, and interest, going forward. We’ve already seen a commercial, along with messaging in several of its ad formats like suggested posts and log-out screen ads. It’s likely that Facebook will place announcements on streams to also signal availability, perhaps targeting users of those four Android devices specifically, or perhaps targeting all of its Android users. Facebook’s own Mobile page has some 6.1 million likes. 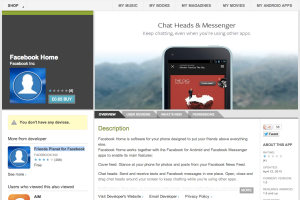 In the meantime, a groan-inducing sidenote and PSA. Hoping to profit from people eager to be the first to get Facebook’s new Android launcher, one company calling itself “Facebook Inc” also launched “Facebook Home” today. (I wrote to Facebook about this in the morning; the app now appears to have been taken down.)

Complete with copy-pastes of Facebook’s own marketing materials, this was a paid app — £0.65 in the UK — and once downloaded simply takes you to another app made by the same developer, “Friends Planet for Facebook.” (I do hope Google Play refunds the money I paid so that I could see what the app actually does.) Perhaps Facebook’s next step with Home should be developing an app store with tighter controls against counterfeits like this.