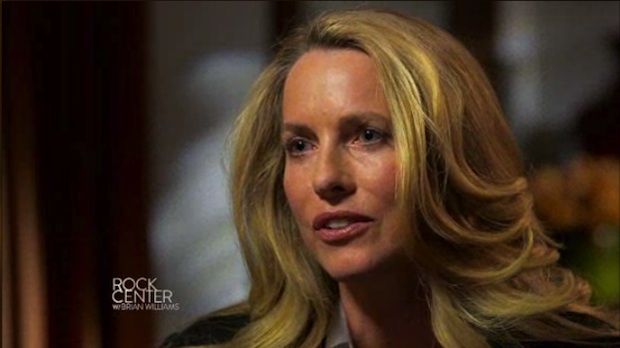 In the first interview since her husband’s death, Laurene Powell Jobs dedicated her sizable platform to advancing immigration reform, while remaining notably tight-lipped about the private life of the late Steve Jobs. We’ve included highlights (with context) from her interview with Rock Center host Brian Williams.

BRIAN WILLIAMS: It’s another way of saying we’re left with a world of really cool stuff. I always wanted to know what it was like to be a Kennedy and drive to Kennedy Airport; and what it’s like to be you at a light and watch 10 people cross, and the only thing they have in common are white ear buds. What’s that like?

LAURENE POWELL JOBS: Yeah. To do what you wanna do, to leave a mark– in a way that you think is important and lasting, that’s a life well lived.

Powell Jobs has been a vocal advocate of immigration reform, partnering with director Davis Guggenheim (Waiting For Superman, An Inconvenient Truth) on a documentary highlighting the struggles of talented, patriotic American youth who have been denied entrance into the military and college because they are undocumented immigrants. To add public pressure for Congress to pass a bill that provides a pathway to citizenship for children of immigrants who came to America illegally, the film (trailer below) is accompanied by a grassroots campaign and website.

BRIAN WILLIAMS: Climb into the minds of our viewers watching you guys on Friday night. So help us process this. How are we supposed to feel about their parents, who did do something bad? This is ill-gotten gains, because the first entry into this country was wrong. How are we supposed to feel about the bureaucracy we would now have to have just to hand Social Security numbers to our Marine, our civil engineer?

LAURENE JOBS POWELL: Yes. It’s understandable that people are conflicted about this. And, yes, the parents broke the law. And so I think that’s why Congress is trying to find a way to make amends. So have them pay a penalty, have them pay back taxes. Have them wait for two decades in order to have the chance to have citizenship. I mean, there are penalties that can be brought out. But then you have someone like Senator Marco Rubio who said, you know, “I understand why these parents came.” You know, if you are in desperate poverty, if you are struggling, if you would do anything in the world to get a better life for your kids, who are we to say — to judge you so harshly?

BRIAN WILLIAMS:…what about the argument that not everyone will succeed and prosper? Some people are trying to game the system; some will be a constant draw, a drain on the American economy. This won’t be all net positive.

LAURENE POWELL JOBS: One of my favorite quotes is a lawmaker said, “I do not support any immigration policy that would have kept my grandparents out of the country.” And I think that’s a good rule. How about we agree upon what our common American values are, which is let’s make this a true land of opportunity. We’re also a land of rules and laws that should be enforced. Let’s fix this problem, and then let’s let people flourish.

Congress is slated to begin debate on a draft of comprehensive immigration reform, which will likely include provisions to allow undocumented youth a path to citizenship, around mid-April.