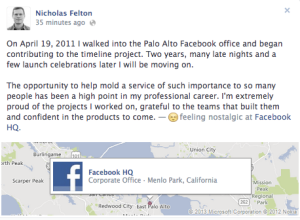 Nicholas Felton, who came to fame through many super-detailed infographics and reports about his life as quantified through data, is leaving Facebook almost two years after being acq-hired to work on projects like Timeline.

His early work, which compiled data on things like all the songs he had listened to or everywhere he had been in a single year into a “Feltron Annual Report,” became the basis for Timeline. In a sense, all the profiles of Facebook’s roughly 1 billion users are all like living, breathing annual “Feltron” reports.

He posted on his page today:

On April 19, 2011 I walked into the Palo Alto Facebook office and began contributing to the timeline project. Two years, many late nights and a few launch celebrations later I will be moving on.

The opportunity to help mold a service of such importance to so many people has been a high point in my professional career. I’m extremely proud of the projects I worked on, grateful to the teams that built them and confident in the products to come.

Facebook acq-hired Felton’s startup Daytum in April of 2011 and Felton and his co-founder Ryan Case moved from New York to Palo Alto.

When Facebook’s vice president of product Chris Cox unveiled Timeline, he said he was inspired by seeing Felton’s annual reports: “14 pages. One year. One book. It was hard to call it anything other than what it really was — art.”

He went on, “We had one reaction: we have to try to hire this guy.”

There’s no word on what Felton be working on next yet.