“Distributing a desktop browser is hard and expensive (especially if you don’t have an operating system or the world’s most trafficked website to promote it)” says Rockmelt, so today it announced it will soon stop supporting its social browser. As consolation, existing users (and those with TechCrunch’s invite link) can access the private beta of its new site that ports its content feed apps to the web.

Rockmelt was founded in 2009 with an ambitious mission: to reimagine the web browser for the social era. As an alternative to bookmarks, the left and right edges of of the Google Chromium-based browser housed a buddy list of online friends to chat and share with, and a stack of icons for your favorite sites and social networks that displayed counters for how many times they’d be updated since your list visit. The idea was to relieve you of having to manually check your Facebook, Twitter, and bookmarked page for new content in an endless loop. 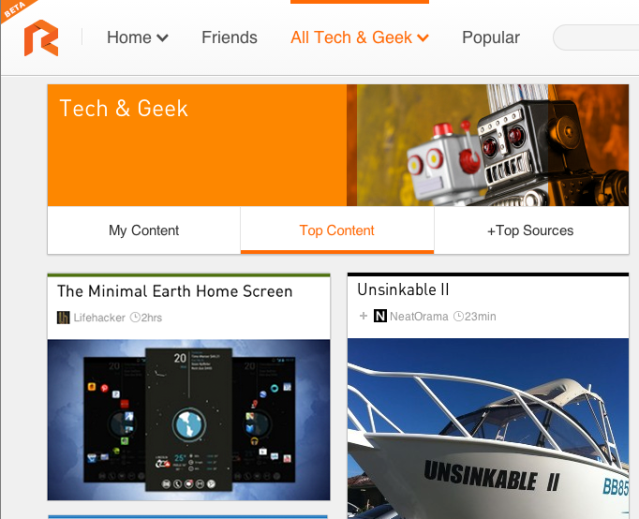 Users who picked up Rockmelt had strong engagement with tons of clicks to these app edges each day. But it just couldn’t seem to make a dent in the marketshare of Chrome, Internet Explorer, and Firefox. Meanwhile it was burning money trying. Luckily a formal product development partnership that some believed was a pre-cursor to an acquisition helped the startup raise a $30 million Series B from a A-list investors Accel Partners, Khosla Ventures, Andreessen Horowitz, SV Angel, and First Round Capital. 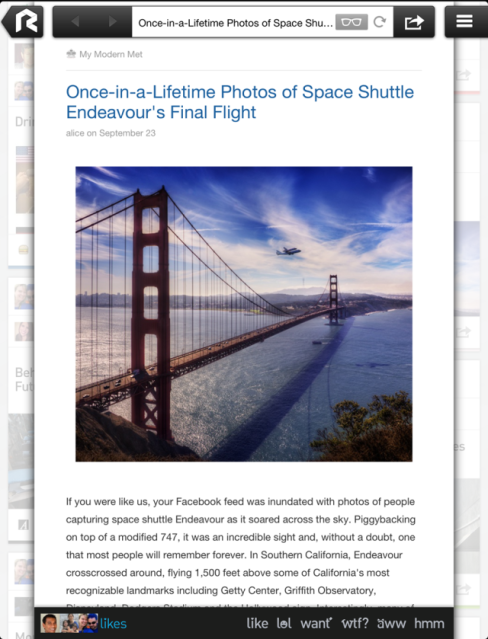 By October 2012 it only had 4 million registrations, and decided to refocus on a new concept, that content should be delivered to you rather than hunted for, and a new medium, mobile. It launched Rockmelt For iPad and later for iPhone, which fed social updates from friends and posts by sites you subscribe to into a Pinterest-style masonry grid of visual tiles. This apps harnessed the strengths of the small screen, offering a laid-back content browsing experience where you never have to type. While they didn’t rocket to the top of the charts, the team tells me they have hundreds of thousands of users that are highly engaged.

In the end, Rockmelt realized it had lost the browser war. While it knew gaining traction for a desktop browser would be tough, the team writes it didn’t foresee it would end up spending 50% of its development time on keeping Rockmelt up to date with the latest build of Chromium, the open source browser framework Rockmelt piggybacks on. So today it confessed “at some point in the next several months we will end-of-life the browser. Well before that point comes, we will give you plenty of notice and help you transition all your stuff like bookmarks.”

But The Mobile Battle Has Just Begun

Rockmelt refuses to die though. Ditching the browser was more like cutting off a gangrenous limb than suicide. Now it has a new mission “to help people navigate the web better”, co-founder and CTO Tim Howes tells me. He explains that at first the web was navigated through URLs, then portals, then search, until now where there’s “much more of a lean-back experience where our friends curate content for us.”

Rockmelt been championing that shift on mobile, but today it unveils a web version of its content feed apps. Howes explains that at first. You can watch a quick demo of the new Rockmelt.com private beta below, or use this special invite link for early access courtesy of TechCrunch.

Once you connect your social accounts, you’ll get a big grid of tiles displaying headlines and images for stories piped in from your Facebook and Twitter contacts plus Pages, accounts, and websites you follow. The endless visual stream is sleek and  snappy, as co-founder and CEO Eric Vishria says the site “pushes the limites of HTML5 and JavaScript”. Click one and it opens in a “web view” when possible — a quick-loading stripped down version of the destination site overlaid on Rockmelt.

The main feed is solid for reading all your favorite content in one place, but doesn’t help you expand your tastes. Luckily there are the Explore and Popular feed. Explore lets you choose from dozens of categories to see stories from a curated list of relevant publishes. So if you click Tech, you’ll see updates from TechCrunch, Wired, The Guardian’s tech section, and more without having to individually subscribe to them. Vishria describes the Popular feed as a “visual Reddit” where you can see the top stories as determined by engagement from Rockmelt users. There’s a Friends feed and search option to, and at any point you modify your set of subscriptions. 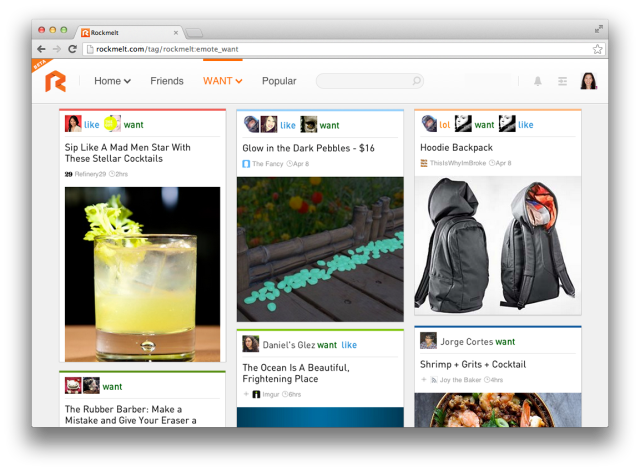 If you’re a news junkie or are constantly looking for entertainment/education/distraction, you might enjoy Rockmelt.com and its iOS apps. The mobile versions both got a big update today that’s supposed to make them twice as fast plus adds more color, @mentions, hashtagging, and a pictures feed.

The question is whether Rockmelt can uproot our web browsing behavior. Many people have entrenched patterns of clicking their bookmarks and scanning their dedicated social feeds. While Rockmelt might be a bit more efficient and visually appealing, it’s current direction might not be quite groundbreaking or viral enough to attract a large audience. It’ll need one so that when it eventually starts monetizing (I’m guessing through sponsored content tiles), it can make enough money to stay afloat and eventually pay back the $40 million it’s raised.

For now, though, it’s reassuring to see the startup admit failure in the browser market but persevere. And as we move into the tablet and smart TV era, turning the web into a laid-back channel to be watched could get people to finally sit up and take notice of Rockmelt.

Use TechCrunch’s invite link to check out Rockmelt.com, and download RockMelt for iPad or iPhone