Erply, the company that makes cloud-based and iPad-centric point of sale and inventory management software for retailers, is up against big competition: Microsoft, Oracle, and RetailPro are just some of the behemoths in the same space. But three years after its US debut, Erply tells us it is still in the game and seeing encouraging growth — and has hit some new milestones that show its progress.

The New York City-based Erply now has 100,000 stores on its platform, with customers including names such as Elizabeth Arden Retail, The Athletes Foot, and UNICEF, co-founder and CEO Kristian Hiiemaa told me in an interview today. The company has grown its staff from four full-timers to 40, split between New York City and Estonia. While 70 percent of its customer base is in the US, Erply’s client reach is spread worldwide across 15 countries.

And most importantly, all of those numbers are translating to good things at the bottom line. For the past three quarters, Erply has had profitable operations, Hiiemaa says. 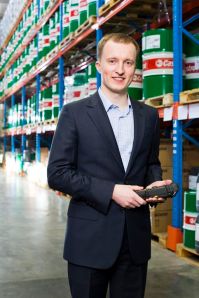 The main draw to Erply compared to its big-name competitors is that it was designed for ease of use, rather than with the assumption that a store would bring in a consultant to help manage it. “You don’t need an MBA to use Erply,” Hiiemaa likes to joke. The company also is more permissive in who can use its software use license than its competitors, he said. “We have a really flexible usage model because we want it so that every person in the company can use our software without worrying if it will be costly, or if they can afford an extra user.”

Looking ahead, Erply has some interesting things under development, including its own NFC-enabled hardware device to manage inventory that should be making its debut later this year. More social plug-ins are a focus, and also under development are WordPress-like tools to help customers make their own customized receipts and such. There’s buzz that Erply could take on more growth capital to fuel these projects, so we’ll stay tuned for news on that front.

And while point-of-sale software and inventory management doesn’t sound like the most world-changing thing, when Hiiemaa talks about Erply, you can see how the mission is important in its own way — helping retailers make it in the new millennium. “The most important thing for me is helping retailers to survive and be successful,” Hiiemaa says. “They have stores, locations, inventory, but they lack web knowledge and algorithmic-powered tools to understand retention. Otherwise, online eats the stores.”

As wonderful as online shopping can be, I don’t think I’d want to live in a world without stores, restaurants, and service providers like salons lining the streets stocked with physical things and staffed with real live people. These are the things that make neighborhoods tick, and if Erply helps them stay in business, that’s a noble pursuit indeed.