If you can imagine that muttered monologue taking place every 15 minutes or so for an entire day, you’ve got my email situation in a nutshell. There’s not much I can do about those lackluster pitches, but New York startup Unroll.me has just rolled out a revamped version of its email management service in hopes of further thinning out the amount of marketing email and subscription junk that clogs people’s inboxes.

In case you’re not up to speed with Unroll.me, here’s the gist: it’s a service that wants to streamline the process of dealing with all those annoying-but-useful marketing emails. Once Unroll.me has been setup, you’re given the option to select which companies’ emails are still worth paying attention to, at which point the service will fold all of them into a single daily marketing blast they call the Rollup. Of course, if you decide you’d rather never hear from some of those companies again you can unsubscribe en masse.

As neat as the concept was, Unroll.me co-founder and COO Jojo Hedaya said that the earlier version of the service had more than a few kinks that needed working out. As he puts it the site was “very buggy and confusing,” which prompted some users to ditch their Unroll.me accounts completely — not exactly the most heartening prospect to face when you’re running a bootstrapped startup in New York City. After spending some time conferring with users who left and those they invited into their offices, the team put their collective noses to the grindstone and redesigned everything. Again. 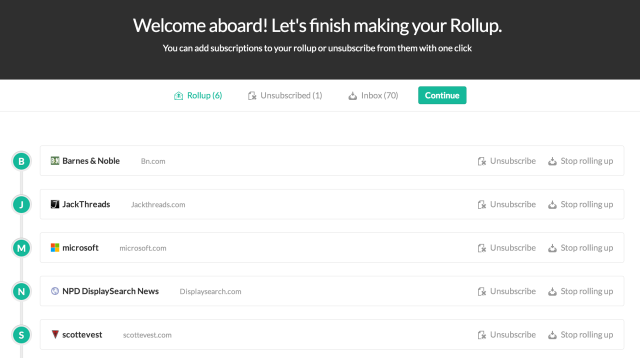 As you’d expect there are plenty of cosmetic differences — the site is swathed in greys and greens, and is now much easier to fire up and navigate in a mobile web browser. Unroll.me can also now differentiate between emails from companies and notifications from your social networks of choice, and will display the latter without all of the extra visual cruft.

There are plenty of weightier updates to be found here too. For one thing, the process of adding subscriptions to your Rollup has become less automatic. While that may sound like a step backward, it’s actually much better than the way things used to work — back in the old days, Unroll.me used to add all of your new email subscriptions to your Rollup by default whether you liked it or not. Speaking of the Rollup, users also have the option of peering into the past by viewing stored versions of all their old daily digests, as well as previewing tomorrow’s Rollup ahead of time. Oh, and they’ve finally added support for a mail service that isn’t Gmail/Google apps: Yahoo mail users can now kick their myriad marketing missives to the curb.

After mucking around with the new service for about a day, it seems like a definite improvement over the Unroll.me of a few months ago. It’s still not quite perfect — support for more email providers would definitely help — but considering the number of times the team has redesigned everything, I suspect they’ll just keep iterating until they finally hit that sweet spot.