Who knew that package delivery would become a hot space, especially when it involves installation of physical lockers? Last week, we uncovered that Google’s recent acquisition, Bufferbox, was planning to invade the San Francisco Bay Area with its shipping service. Of course, after being acquired, nobody knew what would become of Bufferbox, so another Y Combinator company, Swapbox, stepped in to fill the potential void.

I spoke with Swapbox’s founders today and learned that their plans and strategy are “unchanged,” and that the team knew that Bufferbox would eventually come to the Bay Area, expanding from its current locations in Canada.

Swapbox recently installed its service in San Francisco’s Nob Hill section, mostly because of the concentration of people in the area. The company’s co-founder, Neel Murthy, says that activity with Swapbox is impressive in such a short period of time, with two-thirds of its customers being repeats. Of course, with Swapbox and Bufferbox, you don’t get assigned your own static P.O. Box, you can have your items shipped to any location that’s available.

“We’re still just steadily rolling out Swapboxes, building out the independent infrastructure that everyone can use, and growing our footprint,” Murthy says. 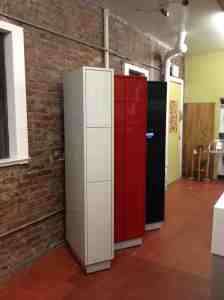 He added that the company is set up to install the Swapbox quickly, thanks in part to its modular design, which allows them to easily fit the cabinet into the space that’s available. Basically, no custom cabinets are needed.

Of the feedback that Swapbox has received, the most interesting is that its customers are asking them to build out notification services that remind them to pick up their shipments before they leave work. Murthy says that Swapbox is seeing an average of four hours between notification that the item has been received and the actual pickup.

The key to services like this, which are being mimicked by huge retailers Amazon and Walmart, is that consumers shouldn’t have to worry about being at home to wait for a package. If one of these services is available in an area where you work, it’s likely that you’d rather go there to pick up your package than to wait for FedEx to come back after a missed drop-off. Something like Swapbox isn’t limited to just Amazon and Walmart purchases, which is an advantage in getting repeat customers.

After Nob Hill, Swapbox will be infiltrating the Mission, another highly populated area in San Francisco. The current cost to use Swapbox is $1.99 per shipment, so it must stay competitive with Bufferbox in that sense to succeed.