Recent TechStars Boston grad Fashion Project has a different take on the second-hand apparel market. It operates an online store where women can donate their high-end designer items, and others can re-purchase them for less than retail, knowing that the majority of sales are donated directly to charity. The company has now attracted the interest of investors, too, and days ago closed on $1.8 million in seed funding from Atlas Ventures, High Peak Ventures, Schooner Capital, and other angel investors.

As co-founder and CEO Anna Palmer describes it, the idea is to make “fashion a force for good.” Palmer started the company with former Harvard Law School classmate, now COO Christine Rizk. Both founders have a background in the non-profit sector, informing their understanding of the space, but they share a love of fashion, too.

The story of how Fashion Project came to be is rather cute. The co-founders were standing in line at graduation together. “At Harvard, they sequester you for hours and hours, because there are so many ceremonies,” explains Palmer. “I knew I wanted to go into startups, and Christine knew she wanted to do something in business, possibly startups as well,” she says. “By the time we had crossed the graduation stage, we had decided we were launching the company instead of going into big law.”

Fashion Project focuses on a trio of problems facing charitable donations today – especially those involving the donation of high-end goods. For starters, donors who spend top dollar on their items don’t want to toss the goods in a trash bag and leave them at a thrift shop or Goodwill, for example. They’re also not that interested in the tax write-off aspect of thrifting, because donors are only able to claim the sale price of a donated item which is typically low. 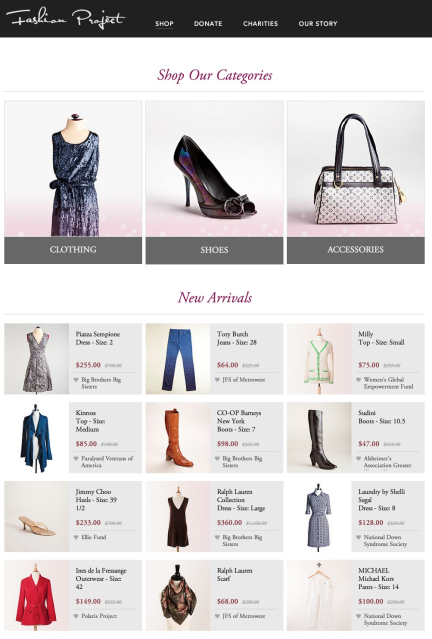 On Fashion Project, however, items resell for over 7 times more than a thrift store, on average – a price point designed to help encourage more donations. And for charities in need, it offers them another way to compete for dollars, by instead benefitting from the items’ sales.

Donors who sign up for the site simply fill out a form and are then mailed a donation packet to their house. They load up the packet with their items, and send it back. Once the items are processed and placed online, the donor can also track how well their closet is doing in terms of how much money they’ve raised for charity and the impact they’re having. Since its launch in November, the site has seen a quarter million in terms of the value of donations it has collected to date, but the founders declined to provide details regarding transactions or registered users.

Fashion Project is currently working with over 50 organizations, including Autism Speaks, Big Brothers Big Sisters, Christopher and Dana Reeve Foundation, Dress for Success, It Gets Better Project, National Down Syndrome Society, and many others. The donor can select the charity they want to use, and if it’s not listed on the site, Fashion Project will reach out to the organization to bring them on board.

Meanwhile, shoppers can browse Fashion Project’s sales on the site, which is more of a traditional e-commerce experience with the exception being that, at checkout, shoppers see what kind of impact their purchase had. “We always say, it’s feeling like a hero for buying a pair of Jimmy Choo’s,” says Palmer. “It’s kind of a funny thing to say, but since 60 percent of everything you buy goes directly back to charity, you can have a major impact through your purchases,” she adds.

Fashion Project keeps the remaining 40 percent, and donors are sent a tax receipt after their items are sold.

Operating out of a warehouse in Boston, Fashion Project’s operations and distribution efforts have been the focus up until now. “We spent a whole lot of time at the beginning of the company making sure that the backend operations were completely nailed start to finish,” says Palmer. “I feel like we’re in a really good spot and can handle as much volume as people want to throw our way.”

Going forward, the company will use the funding to help with growth. It’s preparing to launch a new website this month, which will be mobile-optimized. Around the same time, the company will announce participation from some high-profile fashion industry players, too, likely joining as celeb donors. Native mobile apps are also on the longer-term roadmap for the company.