It could make us more willing to express how we feel. Or you could say it over-simplifies our complex moods and lives. But today the Facebook status update box began offering the option to “share how you’re feeling or what you’re doing” through a drop-down menu of emoticons and media. We’re entering a more structured era of communication, where both friends and big data know exactly how we tick.

Facebook began testing the new sharing options in January, but only released screenshots. Now it appears the feature has been given to a much wider audience. It’s likely the beginning of a global or at least US or English language rollout. I’ve contacted Facebook for details. [Update 11am PST 4/9: Facebook says “We are rolling this out to more people in the US.” Update 11am PST 4/10: Facebook has now published a blog post detailing the new feature.] Most mentions I’ve seen of the feature have been from the United States, and many note the similarity to an old Myspace mood sharing option.

Once you have it, when you go to share a status update from Facebook’s desktop site or the mobile site m.facebook.com, you’ll see a smiley face button between the options to add a photo and select the privacy setting.

The button lets you select to share what you’re feeling, watching, reading, listening to, drinking, or eating. Each brings up a sub-menu of emotions, media, or nourishments. You can add an extra description if you want, and when you share the post will have “is feeling comfortable” with an emoticon or “watching Game Of Thrones” with an image and link to a piece of content’s Page at the end of your story.

Facebook’s little intro pop-up notifies you that “Details you add to posts also appear on your About page and other places on Facebook”. That means they could be used as recommendations for Pages, eventually wind up in Graph Search, or potentially even be used as ads shown to your friends. I go into detail of the business ramifications in my article from when the feature went into testing.

What’s just as fascinating as ads for Kleenex when we’re sad or where we sip our coffee influencing search result rankings is what the feature could do to two core ways we communicate on social media. We talk a lot about what we’re doing. The music we’re listening to, the TV shows we’re watching, and the places we’re getting drunk. By making it easier to formally tag these things, we provide a better gateway to experiencing them for our friends.

Rather than go searching for Robert Delong, my new favorite musician who sounds like the second coming of The Postal Service but with bass, I can select him from a smart type-ahead drop-down. Friends can then click through to his Facebook profile and hit the “Listen” button to automatically play him on their preferred streaming app. I didn’t have to go search for a YouTube link or even use Facebook’s search box and copy his Page’s URL. I browsed for and added what I wanted to share, all from within the status composer. 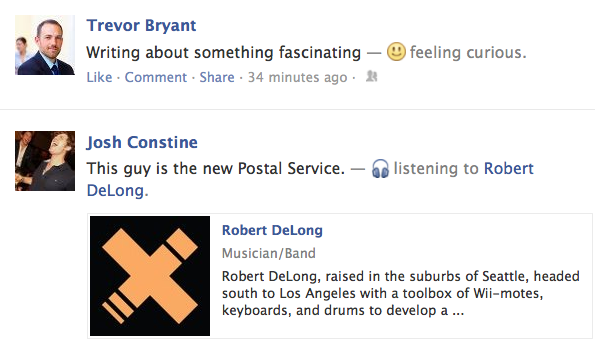 Then there’s the fuzzy side. Emotions. Sharing how we feel. To some it comes easy, with exclamation points, colorful language, or typed-in emoticons. For them, mood sharing could let them do it fast, and with a bonus little graphic that could draw people’s eyes. But to others, saying how they feel is tough. You might fear you can’t boil down emotions like anguish or dumbfounded excitement. That you’ll lose something in translation. And you might be right.

But the option to select and share a pre-constructed emotion could make some people more open than they usually are. And that’s whole point of Facebook.