Blab is launching a platform that allows businesses to predict — up to three days in advance — which social media conversations are going to be important.

Co-founder and CTO David Snelling gave me a brief demo of the product yesterday. He showed off a visualization tool that highlights the up-and-coming topics at any given moment, a “magazine view” featuring the most engaging content in a given topic, and most uniquely, a chart predicting the extent to which the conversation will spread in 12, 24, and all the way up to 72 hours ahead, along with an indicator of how confident Blab is in its prediction.

To be clear, Blab can only make these predictions about conversations that have already started — it can’t predict what news will break in the next three days. But even though it’s not a crystal ball, Snelling argued that it can help companies decide which conversations they should join and which topics they should focus on. After all, those companies don’t want to hop on a bandwagon just as the excitement is dying down.

“If you’re going to create long-term content, you want it to be where [consumers] are going to be landing, not where they are now,” Snelling said.

Co-founder and CEO Randy Browning added that these predictions help companies “emerge from the thicket of trees and get a view of the forest.” 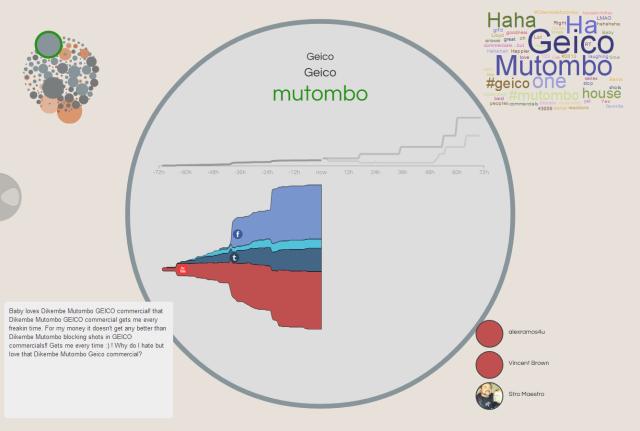 The predictions can be made with as little as 30 minutes of data, Snelling said. To do so, Blab looks at the initial conversational patterns and compares them to past data, so that if things are unfolding similarly to a conversation in the past, the technology can extrapolate how the conversation will proceed.

Other Blab features include the ability to identify influential users and to find relevant comments even if they don’t use a specific keyword. In the future, Snelling said he wants to add more nuance to the predictions, so that they suggest which platforms are likely to see the most activity.