Mobile website maker DudaMobile has just raised another round, following a busy 2012 which saw the service grow to 4 million mobile sites, the introduction of new partnerships, and a major overhaul of its site builder product. The funding, an extension to its $6 million Series B from last spring, brings in $10.3 million in new funding, led by previous investors Israeli-based Pitango Venture Capital and Oren’s Capital.

The company got its start as a white label platform which allowed businesses to build mobile-optimized websites. Then, around a year and a half ago, it launched a self-serve platform open to anyone. Unlike some DIY website building tools out there, what makes DudaMobile interesting is that it takes an existing desktop website and turns that into a mobile site that automatically stays in sync with its desktop counterpart as new changes are applied.

In addition to pulling in the content from the desktop site, DudaMobile’s product also looks elsewhere across the web, where the business might have other data worth adding to its mobile presence. For example, the site builder can pull in content from places like Facebook, Yelp, or Google Places – even if the website owner didn’t provide their usernames or URLs for those services.

Last month, DudaMobile relaunched its website builder after five months of development efforts, updating its legacy interface to uncover some of the buried features, while also making it more intuitive and user-friendly.

The company has also formed several high-profile partnerships, with resellers and other partners like GoDaddy, Yahoo, Google, Homestead, OpenTable, AT&T and Webs.com. It closed several deals in Japan, as well, two being Yahoo Japan and GMO Nikko, and three more which it’s not yet permitted to disclose for a month or so. It has also localized its platform in three other languages besides English, including Spanish, Portuguese, and Japanese.

The Google GoMo partnership, which offered small businesses free mobile sites, officially wrapped last month, but the impact to DudaMobile was huge. Over the last year and a quarter, the company grew its team from 5 in the U.S. and 15 in Israel to now 30 in the U.S. and 30 in Israel. Last summer, the Palo Alto-based company opened up an office in Atlanta, Georgia, too, focused on mobile advertising.

This new division launched in response to customer feedback, explains DudaMobile’s Communications head, Dennis Mink. Once they had their mobile website running, he says, customers then wanted to know how to get traffic, leads and sales. The ads team now helps customers run mobile search and ad campaigns, especially those that get customers to call the business directly. “That’s so much of what it comes down to these days on mobile websites these days – it’s that little ‘click-to-call’ button…it’s unbelievable how successful that little button is,” Mink says. 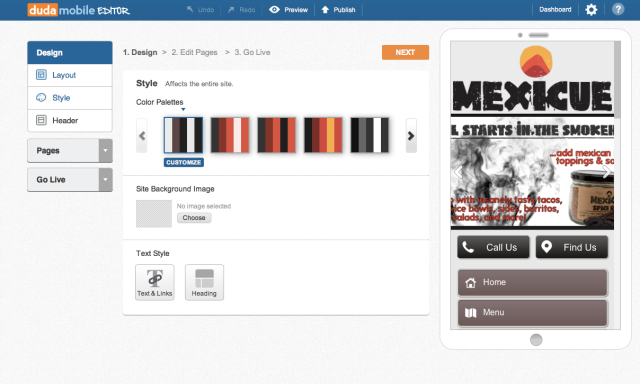 The GoMo deal also helped DudaMobile grow its brand-name recognition, and build out its reseller program. While the company declined to provide revenue information, Mink says growth on that front has been “significant” and the company is hoping to hit profitability by year-end.

Mink also teased news of a “game-changing” new product release expected to launch into beta later this year, but wouldn’t go into details. “It will leverage all the experience we have in converting sites and identifying content and being able to reorient it in different ways for different screens,” he hints.

Also in the works, and expected to release at the end of April, is a new “build from scratch” mobile site builder which instead of syncing with an established desktop site, simply lets businesses start a new site on mobile, whether that’s because they’re bypassing the desktop altogether or they need a site to function as a mobile-friendly landing page for a campaign.

With the additional funding, DudaMobile has raised around $18+ million in total.