According to an NVCA and Thomson Reuters report issued this morning, U.S. venture capital firms raised $4.1 billion from 35 funds in the first quarter of 2013, an increase of 22 percent. But compared to Q4 2012, there is a 14 percent decrease by number of funds.

“The first quarter venture fundraising activity represents more than just a “slow start” to the year and really demonstrates the contracting and consolidating nature of our asset class,” said John Taylor, head of research for NVCA in a release. He says the “the lack of a strong exit market is keeping many funds that would like to be raising money away from investors until they can demonstrate a track record. This dynamic is keeping the number of funds raised low. Many of the larger funds closed last year and won’t be back in the market until 2014 and beyond, keeping total dollar levels lower this year.”

The NVCA is predicting lower fundraising levels this year, so it should be interesting to see if this actually is reflective in the numbers. There were a number of large raises last year, so perhaps we’ll see a bigger 2014 for VC fundraising. 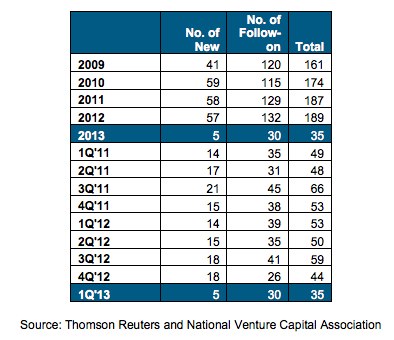