Google has stepped up its efforts to remove spammy or otherwise non-compliant applications from its mobile application marketplace, Google Play, in recent weeks. App deletions hit a record high in February, with 60,000 apps removed during the course of the month – the largest round of app deletions to date. The news of this massive app removal comes just ahead of the rumored launch of a revamped version of Google Play (version 4.0), which is expected to arrive in the near future.

We learned of this large, new round of app deletions from a company in the mobile app industry which has insight into changes like this.

To be clear, not all of these apps were deleted by Google. Some, such as a handful of Sprint bundles and apps, as well as the product from startup cautionary tale Color and several others, were likely pulled by the publishers themselves. But with a number as high as 60,000, it’s clear that many of these were pulled by Google directly.

Below is a summary of those findings, indicating which categories were most affected. As you can see, a good number of the deleted apps were those in the MP3/ringtone category, which often includes less-than-reputable publishers, to put it kindly. 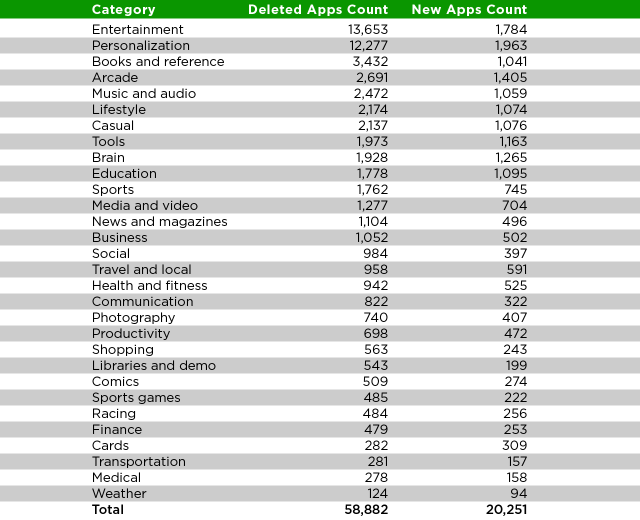 Though Google doesn’t vet apps prior to publication the way that Apple does for the App Store, it has historically deleted applications that violate its Terms of Service, such as those spreading malware, infringing on others’ copyrights, or those with graphic, sexual material. However, Google often addressed these situations in the past more as a “one-off“- jumping in to immediately pull malware, for example.

Google won’t comment on the record about mobile app deletions, but it’s understood that, as with Google Search itself, the company has been steadily improving the capabilities of its automated systems. Instead of reviewing applications ahead of publication one-by-one with an army of reviewers as Apple does, Google takes the opposite approach and scans its app store after the apps have gone live. As Google Play’s store grows, the data pool also gets stronger, allowing the company to improve upon its algorithms and automated efforts at handling spam.

Spam apps violate a number of Google policies, necessitating their removal. In fact, the company has a dedicated section in its Terms of Service detailing how spam apps are identified:

Spam and Placement in the Store

Developers are important partners in maintaining a great user experience on Google Play.

With so many ringtone/MP3 apps in the recent deletions, it seems that Google is starting to moderate its own app store for quality – it’s just going about it in a different way than Apple.

It’s also worth noting that as today’s mobile application marketplaces continue to grow in size, the sheer number of applications available becomes a number of lesser importance. In February, the Apple App store had more than 800,000 applications for iOS devices, while Android’s “official” number was 700,000 apps as of this past October. Meanwhile, some more recent estimates have placed that number as high as 800,000 currently, or as low as 676,000+, depending on your data source. For what it’s worth, Google today confirms again that its official count is still 700,000.

For end users, the difference between 600,000 and 800,000 apps is not as meaningful as the number implies. While as an early adopter, it means that a number of the startups TechCrunch covers aren’t available on Android on day one, but for mainstream users, these missing apps represent the long tail. Today’s Android users may be more concerned about the quality of the apps that are live and available for download, not the numbers. And quality is a metric that Google’s automated systems can now attack at scale.