Facebook had its big coming-out party for mobile on Wednesday, and its Home launcher will soon start shipping exclusively on an HTC device. This is the social network’s first crack at being the default experience on any device. Until now, using Facebook has been a completely optional and background experience, meaning you’d have to visit its website or download one of its apps. After nine years, that approach worked rather well, to the tune of over a billion users. To get to the next level, Facebook had to start dipping its toes into uncharted territory…being the default.

Creating a situation where you are the default, out-of-the-box experience certainly has many advantages. For example, HTC is putting all of its marketing power behind the HTC First, and Facebook probably didn’t have to pay a dime for any of this. The phone manufacturer is hoping that even though this isn’t a true “Facebook Phone,” that the fantasy of it being that, along with a manageable $99 price tag, will be enough to sell a slew of them. AT&T is certainly helping the cause on their site with this massive advertisement, which is of course what you see by default when you surf there:

The importance, and potential negatives involved, cannot be overstated.

The Power Of Default

Talk to Microsoft about defaults. It worked quite well for its Internet Explorer browser until it got them into hot water. We’ll get to the hot water later, but Internet Explorer was a beast, because it shipped as the only browsing experience for Windows machines. Was it the best web browser out there? For a while, yes it was. Installing another browser used to be seen as something only really geeky, or adventurous, people would do. I remember tweaking my old Windows machine every chance I could get, downloading any other interface to the web that I could download. For most, though, the idea of using something not blessed by Microsoft was risky and not worth the time.

During the early “browser war” days, the only other viable options to Internet Explorer were Opera and Netscape Navigator. There were plusses to both, but nothing overwhelming. Web surfers simply wanted to use the web, so they used the interface that was given to them, and it worked. For its operating system, Microsoft stole the enterprise market because they were the only option, and once one big company became a Windows shop, everyone else had to if they wanted to compete. 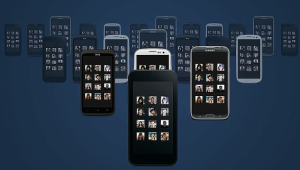 Facebook is now in a similar situation with Facebook Home. They are the most popular experience for interacting with your friends online. The lure of Facebook is just that — all of your friends and family are on it. Why would you use something else to talk to them if that’s where they spend their time? Every app developer is trying to conjure up a “Facebook Hook” because it’s the easiest way to attract more people to your product.

The power that comes along with that is just mind-boggling. Zuckerberg knows that after going public, Facebook is in a position where it can put its foot on the gas to get to 2 billion users. To get there, you have to pull out all of the stops. Will Facebook ever create its own phone? Maybe, once they see how the HTC test goes and how many people install Facebook Home onto their Android devices. It’s doubtful that Apple will ever open up enough for Facebook to take over iOS, so if all goes well with Home, there has to be a next phase of the plan.

That plan would be its own phone and hardware. Another company, that starts with a G, has gone through similar testing phases with hardware products, only to start building ones in-house. That same company has its own software bundled with a mobile operating system, but they’ve gotten around any issues by making that operating system open source and modifiable. Or in their words, “flexible.”

The Weakness Of Default

After Microsoft had cornered the browser market with its genius plan of shipping every copy of its Windows operating system with it pre-installed, other players cried foul. At the time, Microsoft saw its distribution methods as its No. 1 asset, because they were. But how could Microsoft not be open and let people choose which browser they used before being thrust into Microsoft’s idea of what browsing the web should be like.

It was alleged that uninstalling Internet Explorer slowed down PCs using Windows, and that Microsoft didn’t provide users with the proper tools to completely rid themselves of the web browser and move onto another one. Accusations flew about monopolies, but Microsoft contested that Internet Explorer wasn’t a product, but just a feature.

It got ugly, and in case you’ve never seen Bill Gates’ deposition from 1998, here are some of the greatest hits:

If you ever have a lot of time to research this, listening to the deposition or reading through the transcripts are a hoot.

All of this was awkward because Microsoft had helped pioneer home computing, so cases like this had never happened. The questions for Microsoft and the answers that the court received were firsts. It wasn’t a perfect case or remedy, but Microsoft’s stronghold on the browser market soon came to an end. Users don’t have a problem downloading Chrome, Firefox or any other flavor of a web browser anymore. Personal choice is king on the Internet.

The problem here for Facebook is that it will soon find a day where its lock on all of your friends and their data will be seen as a monopoly. Moves like becoming the default experience, even though it can be reversed, for a smartphone, could easily be seen as a move similar to Microsoft’s Windows distribution tactics. Does it mean they’re evil? No, it means they’re smart.

Being smart catches up with you, though, because other smart people find all of the flaws with your product and build alternatives. Now that choice is commonplace for consumers, especially on the web, Facebook for the first time has really opened itself up to someone building a competitive service and becoming the sexy alternative the ugly, old default.

Naturally, Facebook is full of really smart people, people that have worked with Microsoft’s finest for years, since they were an early investor. The social network can of course learn from the software company’s mistakes, but it will be once again heading into uncharted territory. There will come a day, maybe sometime soon, where Mark Zuckerberg is being deposed over what is seen as monopolistic behavior. There will be companies like Netscape and Opera who are crying foul, putting all of their efforts behind breaking down everything that Facebook had built over the years with its distribution methods. 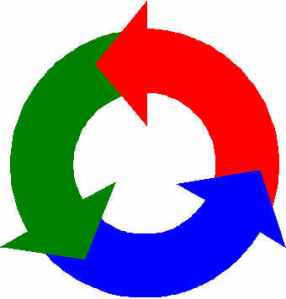 It’s all cyclical, there has to be a big guy. Facebook is the big guy in the social space, but when you have that target on your back, you know that others will come after you. Facebook will have a Pepsi to its Coke, and some predict that the true Facebook alternative will be a place for younger people. Only thing is, Zuckerberg already thought about it and that’s why it partnered with HTC for the Home launch and why it acquired Instagram. If it goes where the younger people are and captures that market, it will take longer for a competitor to unwind what Facebook has wound over the past nine years. Facebook is already an operating system, but you and I are the bits and bytes that make it up.

For consumers, once they see the same thing every day, even though Facebook promises to update Home every month, they will start seeking out alternatives. Sure, Facebook allows you to take your data with you, but there isn’t anyone that properly handles all of that data just yet to disrupt Facebook’s position. There will be, though. It isn’t Twitter or Google+ alone, but it will probably be a combination of a few services, some of which haven’t been invented yet.

The only problem is, there is no real competitor. Yet. There will be, though, and it won’t be pretty once this cycle happens all over again.