Editor’s note: Hassan Baig is an entrepreneur who runs White Rabbit Studios, a South Asian gaming startup he founded four years ago in Pakistan. Follow him on Twitter @baigi.

It’s an open secret that the social gaming industry is no longer the cornucopia of opportunities it used to be. Rising CPAs, falling k-factors, plateuing ARPUs and channel saturation all have made life difficult for the typical gaming studio devoid of a big network of users or a deep warchest of advertising money. But there’s a new gaming opportunity on the horizon, and the savvy tech investor will do well to take notice of it now that it’s still nascent. This opportunity is the impending mobile gaming boom in South Asia, scheduled to arrive by 2015 for all practical purposes. Read on for a thorough look at the gaming history of the region, emerging fundamentals and future expectations.

Spurred by 200,000 gaming cafes popping up across the country, China witnessed an online gaming revolution in the early aughts. Facing no serious competition from traditional entertainment media heavily tethered by government censorship, gaming companies like Shanda and Giant Interactive firmly entrenched themselves in the typical gamer’s consciousness, making gaming a life-changing pastime in China.

By 2006, sensing the time had come for neighboring South Asia to take the plunge as well, India’s Reliance Entertainment released a gaming portal called Zapak. But unlike China, the response that Reliance received was lukewarm at best, and it turned out to be a stalled revolution. Zapak is still alive today, as are Shanda and Giant Interactive, but whereas the latter have grown to become industry leaders, Zapak never validated the business case upon which it was built.

Ultimately gaming failed to take root in India because of stiff competition from the prevalent form of entertainment in the region: Bollywood and TV. Zapak’s offerings were too underdeveloped, and subsequent interest in them was too thin to displace these highly mature regional media. Thus, other than a curious fringe, Zapak never made a dent in the South Asian universe like online gaming did across the border in China.

Analysts are mistaken to equate South Asia’s lackluster past performance with its potential as a mobile gaming hub.

Today when mobile gaming is en route to become a $48 billion industry by 2016, South Asia is excluded from the discussion almost entirely given its tepid history. But here’s the thing: Analysts are mistaken to equate South Asia’s lackluster past performance with its potential as a mobile gaming hub. Web and mobile games are two very different animals, and where the former failed to make inroads in South Asia, the latter will create some strong ripples.

At their core, mobile games are excellent fillers for idle time when, say, waiting in a queue or for a bus. They harmoniously coexist with going to the movies or watching TV, while also retaining opportunities of exclusive engagement for hardcore users. So whereas web gaming in the region has had to compete with television and Bollywood, mobile gaming will never be in direct competition with these favorite pastimes in South Asia.

Moreover, given the region is one of the most densely populated in the world, it is reasonable to expect the average South Asian to have available more idle minutes due to greater wait times than their counterparts in the west (meaning potentially more minutes available for absorption by mobile games). And as game developers will tell you, every extra minute of engagement correlates to an uptick in ARPU.

South Asia has been globally viewed as a slow adopter of the 3G standard. However, most people have missed the tipping point, which was reached in January: 3G penetration is now growing at a startling rate of 11 percent month over month in India, according to K. Srinivas, president of Airtel, India’s largest and the world’s third-largest mobile network operator.

Such a growth rate ensures that the current pesky 6 percent 3G penetration in India will more than triple within 12 months. That’s an estimated 210 million 3G subscribers in India by mid 2014. And you know that something has surely entered the Indian public’s imagination when Bollywood ends up making a movie about it.

Though lagging behind India, the rest of South Asia is also exhibiting healthy interest in 3G and smartphones. Taken as a whole, South Asia boasts an estimated middle class of 310 million (same as the population of the US). Owing to falling entry prices of smartphones coupled with availability of inexpensive data plans, it can be safely assumed that this 310 million strong middle class will each own a smartphone phone with affordable mobile broadband by 2015. In effect, South Asia is poised to become one of the largest smartphone markets in the world, and the implications of that on the mobile gaming industry are immense.

Because of a lack of widespread credit card usage, ARPU from digital content monetization remains quite low in South Asia. Hence conventional wisdom views the aforementioned explosive growth in smartphones as not necessarily translating to big bucks for mobile game developers. But here’s what conventional wisdom is overlooking: much like Japan and Korea (and China recently), ARPU from mobile content consumption in South Asia will be driven by carrier billing, not credit cards.

Optimistic about the role carrier billing can play in unlocking South Asia’s digital economy, local mobile network operators (MNOs) have sprung into action. For instance announcements of carrier billing rollout by MNOs in the region spotted all of 2012, and have continued well into 2013, as well. As long as MNOs deliver on these announcements and ensure judicious revenue shares for developers, expect the South Asian gaming market to become a big story around the world.

Total mobile phone penetration in the region currently stands at 1.1 billion subscribers, so there exists ample headroom for smartphone adoption. Expect the mobile gaming industry to be volume driven as carrier billing is rolled out and improves payer conversion rates.

Assuming the region’s 310 million-strong middle class is each armed with a smartphone by 2015 and carrier billing can help generate yearly ARPU between $1 and $3, we’re looking at an industry size between $300 million to $900 million annually, and with ample room for further growth. 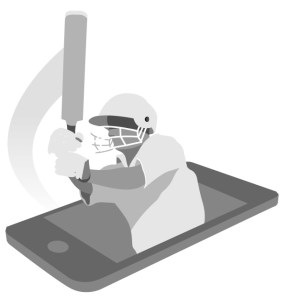 Be it any sphere of life, a localized interaction is much more engaging than a generic one. It’s the reason President Obama uttered the Arabic greeting ‘Assalam-u-Alaikum’ when addressing Arabs in Cairo; it’s the reason popular puzzle game Bewjeweled wasn’t as successful as its exploding-animals clone Anipang in South Korea.

Likewise, the gaming industry in South Asia – a region of rich, unifying culture – will benefit tremendously from localized content. Themes of Bollywood and cricket are pervasive across the region and national boundaries, and present a great localization opportunity for game developers. Similarly, local festivals (e.g. Diwali or Eid) are culturally entrenched enough that no content creator focused on the region would want to ignore them.

Ultimately, great localization will play a key role in driving up gaming engagement and ARPU across South Asia. Thus western game developers aiming to break into the region will be best served by partnering with their South Asian counterparts who understand the local cultural mores.

In an earlier post on TechCrunch, I pointed out the exceptionally low share of social games made in South Asia among the top Facebook games in the world. The story is largely similar across mobile gaming platforms, as well. But change is in the air since the local devscape has come a long way in the last few years.

Much of this progress has been driven by outsourcing shops looking to squeeze a marginal dollar from western game developers, but the ecosystem also ensconces a fair sprinkling of IP-driven local developers vying to usher South Asia into a new era.

More success stories than ever are emerging from the region, startups have begun emulating work environments of their western counterparts to engender a culture of creative freedom, and investor interest has been picking up. In fact, the region has even seen some of its first exits. Expect all of these trends to snowball in the coming year as industry growth gains momentum.

Overall, the fundamentals to support the coming mobile gaming boom in South Asia are firmly in place and the savvy investor should keep an eye out for opportunities in the region. Ultimately, first-mover advantage will play a key role in separating the big winners from the also-rans. As the industry grows and local developers multiply, there will be ample chance for those interested to get a slice of the desi pie on offer.