Reading app Readability once butted heads with Apple on subscription rules, but more recently its friction points have been in competition with apps like Instapaper, Pocket, Pulse, and Flipboard, who all present consumers with ways of aggregating and making it easier to read the vast sea of content available online. Now Readability, which has 5 million monthly active users stripping out and reading tens of millions of articles each day, is launching Top Reads, a reading aggregation service of its own based on the most-read stories on Readability, to get more people to spend more time on its platform.

Top Reads will launch first as a responsive web app for desktop and mobile screens, and Rich Ziade, one of Readability’s founders, says that there will be dedicated native mobile apps on the way in a matter of months if the response is good.

Top Reads is not exactly new. It first appeared in a more pared-down format in Readability’s mobile app last year; Zaide says that has been getting strong traffic, with about two-thirds of the site’s 5 million users dipping into it every month. That was enough attention, he said, to get the company to explore making it into a standalone service with its own URL.

“Discovery is a still big deal,” he told TechCrunch. “We’re getting swamped with stuff to read.” And while Readability has developed a dedicated audience of people using it to tag articles they are finding themselves, this will help them discover more by looking at what others are reading, too.

The new, standalone Top Reads looks more like Flipboard than text river, with pictures and links through to either read later, share, or read instantly.

Clicking through to read instantly takes you to the article’s web page, with a link at the top to read it in Readability’s stripped-down format: 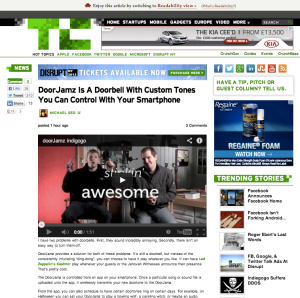 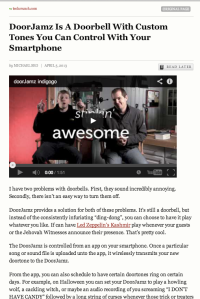 Ziade says that the pared-down version of Top Reads will remain in Readability’s mobile app, which today accounts for just under half of all of the company’s traffic. Over time, the two Top Reads will diverge even more: the in-app version will be a “best of” list, while the dedicated Top Reads site will display a much larger selection of content, with features like views of specific subject categories (eg sport, technology, arts and so on) coming soon.

Readability is currently funded by arc90, an app design studio based in New York, but the plan is to become a viable, standalone business. Ziade says Readability makes a modest revenue from licensing its “parsing engine” to a few device makers and other apps, which use it to present content on their own sites. Some of these are confidential; one that isn’t is Reeder, one of the companies aspiring to the soon-to-be-vacated Google Reader throne.

The idea is to use pick up more of these customers, luring them in not just with Readability’s existing platform, but added analytics along the lines of those that are being used to power Top Reads.

Ziade says that just about every online publisher has had its content pass through Readability’s platform, so it becomes a huge repository of aggregated information about what is getting read. In that vein, getting more people reading and browsing through Top Reads will help further grow that dataset.

“We are already getting a really good sense of what people are reading on the web,” Ziade says. “Top Reads is the first step of surfacing that value.”

What’s interesting is that while services like Flipboard are “social” readers, with people using their social networks to share and discover content, Top Reads is a bit more old school, relying instead on a most-popular algorithm to select what goes on to its front page. The more something is read on Readability, the more likely it will appear on Top Reads. Crucially, the kind of data that Readability is putting together is not, for now at least, based on “learning” what you like or targeting you in any way. The data, and the user, remain anonymous.

There are social elements, too, however. Following @topreads on Twitter, you will be able to get links to articles as they “heat up” on Readability. The same list will be accessible through the Readability app.

While services like Pocket are extending to other kinds of media like video, Top Reads, as its name implies, is going to stick to the written word. “We want to really capture behavior around reading,” Ziade says. “We are focused on shedding light on how people read. They say reading is dying, that people mostly read tweets these days, but people are actually reading tons, and we want to be in the middle of that.” 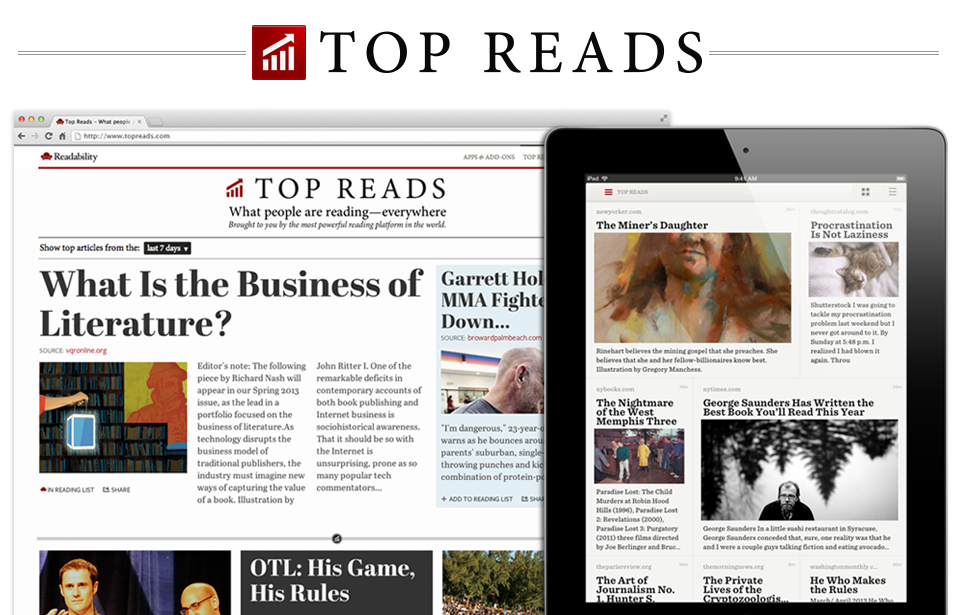