Apple’s trajectory in the U.S. smartphone market over the past little while has been an upwards one, with the company gaining more and more iPhone subscribers every month. During the three-month period covering November 2012 to February 2013, Apple added 8.9 million new iPhone subscribers according to comScore, while Android as a platform in total added only 2.9 million. That means Apple’s share of the total smartphone subscriber base in the U.S. grew to 38.9 percent from 35 percent, while Android’s dropped from 53.7 to 51.7 percent. 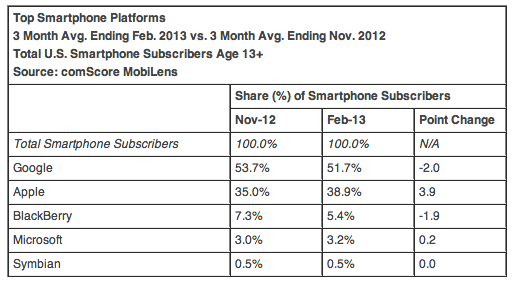 ComScore’s figures also show that in terms of smartphone manufacturers, Apple also continues to lead the pack. Its share among OEMs rose 3.9 percentage points during the three month period, while Samsung gained only 1 percent percentage point, rising from 20.3 percent of the U.S. market to 21.3 percent. That means Apple and the iPhone continue to enjoy almost double the smartphone manufacturer share of its next closest rival.

The loser in this case wasn’t either Apple or Samsung, however, both of whom gained subscribers and share, but BlackBerry, which as a platform shed 1.7 million subscribers in the U.S. between November and February. These numbers predate the launch of BB10, however, so we’ll have to watch to see if that helps BlackBerry stem the tide of users leaving. 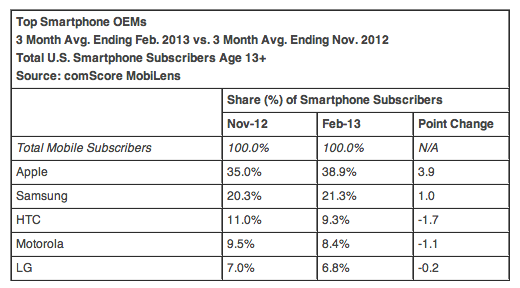 Of course, both Google and Samsung stand to reap the benefits of upcoming device launches, which could help swing the pendulum back in their favor over the coming months. Samsung is on the verge of debuting its next-generation flagship smartphone, the Galaxy S4, with pre-orders beginning in just a couple of weeks. The HTC One is also coming to the U.S. market in mid-April, which could give Android as a platform additional firepower in terms of competing with iOS and the iPhone.

Apple’s success to date has been based on the strong performance of the iPhone 5 since launch, and that device seems to continue to be an attractive choice for U.S. subscribers. There still doesn’t appear to be much in the way of a true race for a third platform, however, with Microsoft and BlackBerry either actively losing share or seeing only insignificant gains. The market is now at a crucial juncture in terms of product releases, but the fight looks likely to continue to remain a two-party affair for the foreseeable future.