Optical character reader (OCR) translation app Waygo, which was part of the 500 Startups accelerator batch that graduated in February, just launched a new version with more functions and social-sharing options. The handy app, which I reviewed back in January, is also currently in the process of closing its first round of investment.

The new version of Waygo boosts more translation capabilities and allows users to share translations with their friends through email, Twitter and Facebook. The developers hope that this will not only increase Waygo’s profile but also help them fine tune the app’s translation algorithms (its OCR was built from scratch in-house). “We hope that our users will share both interesting translations as well as wrong translations so we can improve Waygo,” the team says. 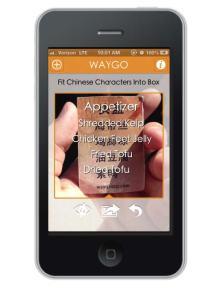 The previous version of Waygo only supported single line translations; this version can read several lines of Chinese characters at once. In addition to food menus, Waygo 2.0 can now translate road signs as well as many other phrases travelers need help with, including short phrases and word seen while shopping.

Since wrapping up 500 Startups, the Waygo team has added two more members and currently plans to close its seed round of investment by the end of April. While the Waygo app is now available for both traditional and simplified Chinese characters, the developers are also developing versions for Japanese and Korean and hope to offer them in the near future. “We plan to address all the high traffic languages for travel, then start addressing other pain points of travel using mobile apps,” the team says.

Waygo’s developers say that they plan to release an Android version of the app by this summer, but must first hire an Android developer and are currently looking for applicants.

This purchase will grant you unlimited Chinese to English translations for a 3 day period after activation. $2.99

This purchase will grant you unlimited Chinese to English translations for a 2 week period after activation. $7.99