Online travel site Peek wants to make it easy for users to discover and book experiences in a variety of destinations, so it rolled out services to three new cities — New York, Miami and Orlando.

The idea behind Peek is that you tell it where you want to go and it tells you some really interesting things to do there. For the most part, Peek is focused on really far-out, unique experiences, such as lunching with an astronaut at Kennedy Space Center or flying in a World War II-era jet above Orlando. With the addition of its three new markets, users will be able to book hot NYC nightclubs, eat their way through the High Line’s food trucks, book a luxury catamaran off the coast of Miami, or charter a private sword-fishing trip near Ft. Lauderdale.

And it’s got a transactional business model, looking to get folks to book these experiences directly on the site. Peek wants to provide its users with an easy and simple place to book experiences without having to worry about going site-to-site looking for individual tickets for various tours and whatnot. 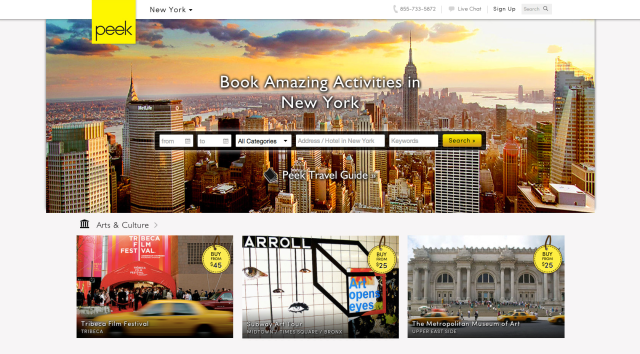 That said, not everything that Peek suggests is paid. It augments those paid-for experiences with free and cheap suggestions on its city pages, and also has suggestions from local tastemakers and celebrities in each of the markets it serves. So for instance, in New York City, Peek has local suggestions from the founder of Alice + Olivia, Stacey Bendet Eisner.

By rolling out market-to-market, Peek can curate the best (or at least, some of the most interesting) experiences for its users. But that also means that its full city guides and activities are only available in a select number of markets. With the addition of its new East Coast destinations, it has more than 10 cities available through the site, but there’s still a long way to go to unlocking all the world’s interesting travel experiences.

To provide travel and activity suggestions in markets it doesn’t yet fully serve, Peek opened a user-generated aspect to the site not long after it launched, allowing anyone to submit “Perfect Days” in cities all over the world. That not only allows its users to find suggestions for things to do in all the cities it hasn’t gotten around to yet, but it also has the side benefit of providing suggestions for unique experiences in markets that it’s hoping to launch in soon.

With that in mind, look out for Peek to add a few more destinations soon. On its site, it lists Boston and Las Vegas as two upcoming destinations, adding them to a roster of locations that already includes San Francisco, Los Angeles, San Diego and Napa Valley, as well as the various islands of Hawaii.

Peek co-founder and CEO Ruzwana Bashir says the company has seen more than 100 percent average monthly growth in bookings since the site launched about six months ago. And it continues to add paid-for activities and providers, not only in new launch markets, but also in places where it already does business. New providers include the Tribeca Film Festival, SeaWorld, the Metropolitan Museum of Art, Miami Zoo, California Academy of Sciences, and Mondavi Winery.

Peek was founded by Bashir — who previously worked at Gilt Groupe, Art.sy, Blackstone and Goldman Sachs — and Oskar Bruening, who worked at VMWare and Symantec. The company has raised $1.4 million in seed funding from investors that include Jack Dorsey, Eric Schmidt’s Innovation Endeavors, SV Angel and Khosla Ventures.