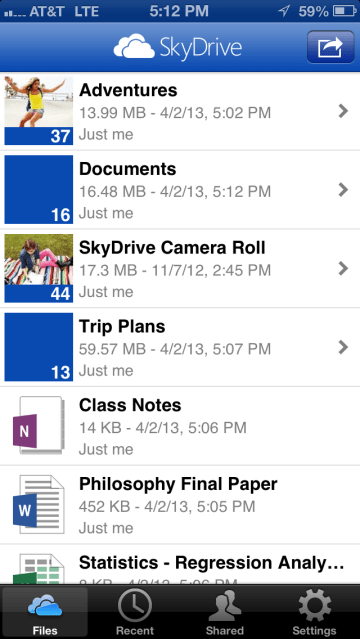 Microsoft just launched SkyDrive 3.0 for iOS, and it took the company quite a while to get the upgrade into the App Store. Rumor has it that there was a bit of back and forth between the two companies over the 30 percent revenue cut that Apple would take when users buy additional storage for their accounts through the app.

It’s not clear how the two companies finally resolved this issue, but as far as I can see, the updated app does not feature an option to buy additional storage.

Update: Here is Microsoft’s statement: “We worked with Apple to create a solution that benefited our mutual customers. The SkyDrive app for iOS is slightly different than other SkyDrive apps in that people interested in buying additional storage will do so via the web versus in the app.”

The update is now available for download and finally features support for the iPhone 5’s larger screen and the iPad mini.

The app also received a few design tweaks that bring it in step with the rest of Microsoft’s cloud-based products by introducing the same flat design that now graces SkyDrive, Outlook.com and the Outlook.com calendar online.

Most importantly, though, the app now features some updates to how it handles photos. Users can now, for example, download full resolution photos to their iPhones and iPads. The new version also gives users full control over the size of the photos they upload and download, and photo metadata is now retained when users upload a photo to Microsoft.

Microsoft also says that “opening and saving files to SkyDrive works better with other apps on your iOS devices.”