Glam Media has built a company around digital advertising and publishing, but today it announced that it’s getting into the print business, with the release of a book version of its Foodie Top 100 Restaurants Worldwide guide.

Other online companies have released their own books and booklets, but they’re usually just a marketing gimmick rather than a serious publishing effort. In this case, however, CEO Samir Arora said the book represents “a pretty big investment,” and it’s coming from a real publisher, Chronicle Books.

The book will include all of the top 100 restaurant lists that Glam released on Foodie.com today — the worldwide list, plus lists for France, Japan, USA, and a final list that covers Europe, the United Kingdom, and the Asia-Pacific region. Arora described it as a high-quality book with beautiful photography.

So why publish a physical book, especially since the content is already online (and also available via mobile apps)? Arora said that he wanted the list to be accessible to consumers in any form that they want.

“Print can be a real value-add for a consumer when done carefully for the right reasons,” he said, adding that for Glam “what cross-platform means is our ability to go back into print.”

As for whether Glam plans other print efforts, Arora said he’s open to it, but he didn’t describe any specific plans.

The Top 100 restaurants guide is notable in other ways, he said. For one thing, it means Foodie.com (which launched last year) is expanding beyond recipe guides. 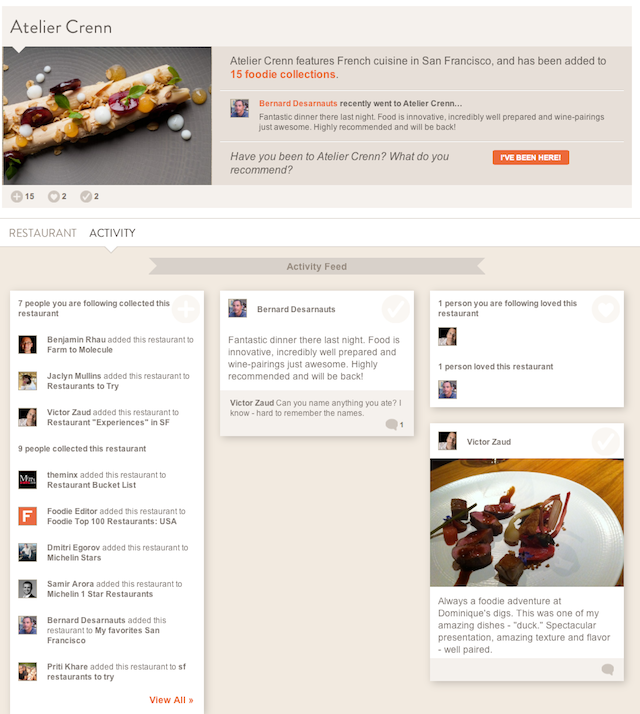 “Our goal is to be the next generation Michelin,” he said. Obviously, Foodie is a less venerable brand than the Michelin Guide, but Arora also said it’s taking a different approach. For one thing, rather than depending on secret reviewers, Foodie enlisted some of the top food critics in the world, including Masuhiro Yamamoto (who was a judge on Top Chef and was featured in the film Jiro Dreams of Sushi) and Pulitzer Prize-winner Jonathan Gold. And those reviewers were instructed to put food first, in contrast to the Michelin approach, which emerged from France and also puts a heavy emphasis on wine.

Arora said the list also shows off some of Foodie’s new social features, because users can build and share their own collections of restaurants that they’ve been to, and that they want to visit — something he argued is much more powerful than just hitting a Like button. Since Glam acquired social network builder Ning in 2011, Arora said the company is now rolling out its own consumer social applications, and the social features on the Foodie list are an example.

And yes, the lists will be updated — Arora plans to turn them into an annual affair.