UK startup DuoFertility is tackling a really tough problem: infertility. The company has built a sensor-plus-service business to predict the most fertile days of women who are having difficulty conceiving to improve the chances of conception — hence its tagline: “assisted natural conception”. There is no invasive technology involved, just a lot of number crunching.

The startup’s approach sits somewhere in the middle of the competition in this space. It argues its technology is more sophisticated than more basic over-the-counter physical products such as home urine tests or body-basal-thermometers (which are also cheaper than DuoFertility’s offering), as the data captured by its wearable sensor is more accurate. Data is also sent back to DuoFertility staff for monitoring and reviewing – so it’s being looked at by specialist staff using bespoke algorithms rather than generalised models.

“It is this combination of both automated analysis and expert review of this data that sets us apart from anything else out there, and probably to a large extent explains why our pregnancy rates are so high for patients who are well past buying something off the shelf at the pharmacy,” he says

“The really surprising thing is that, for only a relatively small increment in cost over the [more basic, competitor] at-home devices, DuoFertility gives a vastly higher pregnancy rate than artificial insemination, and even matches or exceeds that of IVF.”

Success is a little difficult to measure, however, as a variety of factors have to be considered – as Husheer explains: “Although 80% of normally fertile women will get pregnant within their first year of trying to conceive, infertile couples (those who have been trying for more than two years) have only about a 12% chance of getting pregnant over a year. Therefore simply saying x% of patients will get pregnant is meaningless (or worse, misleading) – this does not however prevent some less scrupulous clinics and products from doing exactly this.

“Therefore we publish our success rate data only on these ‘difficult cases’ of infertile patients, and specifically those who have qualified for or already been through IVF. We then break this data down by both female age and time trying for a baby, which are the most important factors in determining success rate. A peer-reviewed scientific paper on exactly this was published at the end of 2011, demonstrating a pregnancy rate that was higher than that from a cycle of IVF for every age group under 45 (the rates themselves ranging from over 40% to less than 15%).”

So what exactly does DuoFertility’s technology do? The product consists of a wearable sensor, worn inside an adhesive patch so it remains attached day and night, which logs the woman’s “body temperature and movement thousands of times a day and night to calculate deep sleep core temperature”, plus a reader unit which receives the data from the sensor via a modified version of RFID. The reader calculates likely future fertility — based on “all of the information it has seen about you to date” (users can enter “a range of different parameters on the reader, from menstruation to ovulation pain to illness”). 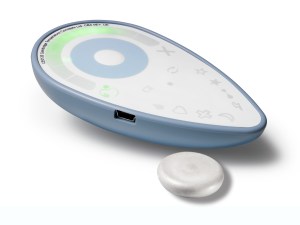 The reader connects to a PC via USB to display past and near future fertility charts. Additional data can then be added by the user, such as medical or home test results and notes for DuoFertility’s staff to read. And all the data is automatically transferred to DuoFertility’s servers in Cambridge, U.K. for analysis and expert review.

“We use all of the data for each individual woman, and all of the thousands of others that we’re monitoring, to work out exactly which algorithms work for the woman most similar to this one,” says Husheer. “That allows us to dramatically improve the prediction of fertility, but also allows us to identify a range of underlying issues that may be preventing conception. There are of course many cases where the data does not perfectly fit any existing model, and so these cases are escalated to human fertility experts for review and, if necessary, a discussion with the patient or their doctor.”

DuoFertility aims to identify the 42-78 hour monthly window when couples should be trying to conceive — and says that by continually monitoring women it can pick up on signs that a particular cycle is similar or different to a previous cycle, as well as compare a cycle to similar cycles in its database.

“Basically, there is zero point in providing a prediction of ovulation down to the minute, if in fact it is five days wrong. Far better to give couples a realistic assessment of when they are likely to be fertile, and update this as we get more data. This means that for some couples ‘the goalposts move’ – they can quite literally see our algorithms updating the prediction when they connect to our servers. And if we recalculate something at our server, and they haven’t connected recently so might miss the newly calculated critical moment – we send an email or give them a call. That call has resulted in more than one baby,” adds Husheer.

Of course not every couple will be able to get pregnant — even after using the product for a long time — so customer relationship management is a “pretty critical” component of the business. Raising false hope is certainly not part of DuoFertility’s business model, says Husheer — although he notes that for couples who can’t afford IVF, continuing to use DuoFertility despite poor “absolute chances” may be their best hope. “We find that being absolutely crystal clear about this often makes for a difficult but ultimately necessary and productive conversation with the couple,” he says. The startup also offers refunds to new users if it believes it won’t be able to help them, and reviews users after four to five months (and regularly after that) to ensure continued use still makes sense for them.

The idea for Duofertility was conceived during Husheer’s PhD research at Cambridge University. The link is indirect, since his research was actually building instruments for particle accelerators. “I realised that several of the instrumental techniques we used could be applied to human physiology, and specifically to monitoring fertility,” he tells TechCrunch. 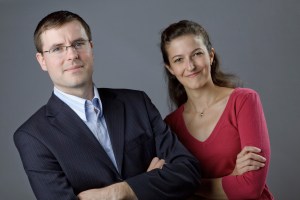 Husheer (pictured right, with fellow co-founder Oriane Chausiaux) and a group of fellow graduate students – “scientists and medics”, some with PhDs in infertility – then got together and entered a university business plan competition in 2006, going on to win £20,000. The money funded a prototype and the filing of the first patent. “By mid 2007 we had brilliant data and several local Angel investors telling us to hurry up and graduate so that they could fund the project,” says Husheer. “Just 18 months and less than £1 million later, DuoFertility had been through design, development, trials, medical approvals and sold to the first customer.”

The first DuoFertility was bought in May 2009, although Husheer says the first pregnancy was “actually somewhat before that” — during early trials. “Sales really stepped up when DuoFertility was stocked by the largest UK pharmacy chain, Boots, in 2011 as the result of our participating in a reality-TV show hunting for innovative new products for the major retailers,” he adds.

Further funding came via the competition route, after DuoFertility won Qualcomm’s European QPrize in 2011. That in turn led to attention from Qualcomm’s venture capital arm. Husheer says the company has now raised a little over £2 million in funding from three Angel investor groups and from Qualcomm Ventures.

Growing In The U.S.

DuoFertility’s next big step will be raising its profile in the U.S. — by targeting key national medical conferences such as the American Congress of Obstetricians and Gynaecologists in May, and the American Society for Reproductive Medicine in October to properly enter the market. Husheer notes the company “recently achieved FDA clearance”, and although U.S. users can buy the device via DuoFertility’s website and be supported in using it, he says the business needs to spend time introducing the product to the medical community to make doctors aware of it and ensure they are happy to recommend it.

“We have a small team on the ground in the U.S., calling on doctors in New York and California to introduce the product and make sure that DuoFertility fits into the way that they practice medicine. Over the next few months we will be hiring several more commercially focused people, both for activities directed at the medical community and the consumer — so any [TechCrunch] readers with experience in bringing similar technologies to market in the US should drop me a line,” says Husheer.

“From a regulatory perspective we are clear to sell anywhere in the E.U. or U.S., and in several countries that accept their medical clearances (e.g. South Africa and many Arab states). As a company selling on the Internet it will be no surprise that we have patients in almost all of these places – in fact we now have babies on every continent except Antarctica. That said, our primary focus is the U.K. and U.S.,” he adds.

Part of the issue with the U.S. market is that, for legal reasons, DuoFertility is not allowed to provide medical advice to the patient directly — but must work through the patient’s doctor. “This means their doctor is preferably included ‘in the loop’ from the beginning, however if the patient just uses DuoFertility without a doctor we can refer to a doctor we work with in their city if they need one,” Husheer adds.

DuoFertility has more than 30 staff at present, working shifts to ensure U.S. timezones are covered. The number of staff is likely to rise over the next year — especially if the company  replicates its U.K. fertility centre on U.S. soil so that American couples can be monitored by staff in the same timezone.

The company broke even in 2011 but has been ploughing investment into ramping up for the U.S. market so, overall, the business has not been profitable recently but Husheer says that’s all part of its growth plans: “Our investors seem to be very happy with this strategy, as everyone can see that the US will be the major market for us.”