I feel oddly guilty rejecting my Uber driver’s offer of a beer and a blunt. It’s 4 am. I’m drenched, hungover, and bewildered as to why I’m in a rustic garage on the outskirts of downtown Austin, watching tattooed pedicab drivers dance with a tiny dog in a pink tutu. This was not the ride home I expected.

Yet, my experience isn’t entirely unusual. After two years of experimenting with Internet services that allow everyday individuals to sell their cars, houses, and things — the so-called “sharing economy” — I’ve become accustomed to getting a face full of the sellers’ hopes, fears and quirks. Between services rendered and cash exchanged, friendships are forged, awkwardness is experienced, and memories are made.

Before the Industrial Revolution uprooted us from our small-town community roots, I imagine most business transactions included a side of humanity. Modern-day business sterilize transactions of the personal element. Human resource departments have hollowed out their employees, leaving little more than a pleasantly smiling husk of a person.

South By Southwest By The Sharing Economy

Every March, over 25,000 technology enthusiasts cram into the moderately sized metro of downtown Austin for the annual tech pilgrimage, South By Southwest Interactive. Hotels are sold out six months in advance, and every public service is bleeding out their windows with demand.

You’d have an easier time catching a cab stumbling naked and drunk down Times Square on New Years Eve than hailing a taxi during SXSW.

At 4 a.m., after the final after parties had simmered down, the only shot I had at making it back to my bed before I had to wake up the next morning was Uber, the popular smartphone taxi application that had contracted with independent pedicabers during SXSW, to usher sleepy technologists to and fro downtown Austin.

I did not, however, foresee the torrential downpour halfway though my trip that instantly saturated my clothes to my frigid bone. No longer able to stand the sharp icicles falling from the sky, yet still needing to finish the ride, our courtesy pedicab driver took a pit stop at Pediacab HQ to pick up his car and stow his bike. 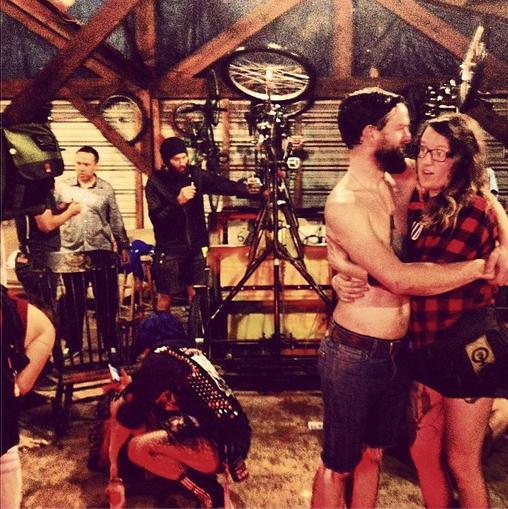 Pedicab headquarters is like the second-class deck of the Titanic, a dimly lit haven where free-spirited tattooed servicemen party their blue collars off to loud music, an abundance of cheap beer, and liberally available recreational drugs.

“I got jungle juice for sale! It’s strong,” yelled a muscular African American man in his mid-thirties, who backed up a truck full of tortellini and cheap liquor, during what appeared to be his nightly run to the breaking pedicabers. Passing off a blunt, a line forms to offer him wads of crumpled dollar bills in exchange for a styrofoam box filled to the brim with cheap, delicious carby goodness.

“They just aren’t cut out for straightforward jobs,” explains my pedicab driver, about his uniform-less colleagues. “I had a regular sort of office job,” he adds. But, pedicabbing “filled a niche that I didn’t even knew existed.”

Indeed, eccentric personalities seem to flock to the peddling business. The night before I had been driven home by a red-headed engineer, whose super-skinny, yet muscular body supported a head with a beard so thick and unkempt, it look liked it had burst out of his chin. He told me that between judo tournaments, he was pulling 22-hour days as a driver to pay for graduate school in geographic information systems.

It goes to show that behind every invoice and credit card terminal is a person who has experienced their own unique set of crazy, which life inevitably presents while living on our crowded Earth. Traditional retail robs us of a truer view of humanity, with its memories and the tangible sense of its diversity.

Though I wouldn’t knowingly pay money for it, sometimes the worst experiences are the most enriching. I once endured 20 minutes of forced laughter, as my driver regaled me with his amateur comedy routine. Lyft, a popular car-sharing alternative in San Francisco, encourages its drivers to be extroverted. Usually, this just means a mandatory fist-bump and a “how’s your day?” On occasion, it’s much more.

My would-be comedian driver reminded me that not every starving artist is hocking paintings on a street corner. More often than not, it’s a cashier scribbling notes in between customers, dreaming of the day he’ll make it big and tell his boss to screw off. Many of the world’s cherished artists, scientists, policymakers, and businessmen have humble roots.Who knows how much creativity and innovation the world has lost due to the callous whims of an entitled consumer.

So, while I can’t give our comedian his big break, my time with the sharing economy has made me more patient with those I regularly interact with. I’ll think twice about giving the stink eye to a barista who forgets my request for extra-foam on my no whip tazo chai frappuccino. I’ll wish my Verizon customer service agent a happy Easter. I might even refrain from tweeting nasty remarks at a politician or vote for a bill to fund a community arts center.

Or, as the Scottish author Ian MacLaren once reminded us:

This man beside us also has a hard fight with an unfavouring world, with strong temptations, with doubts and fears, with wounds of the past which have skinned over, but which smart when they are touched. It is a fact, however surprising. And when this occurs to us we are moved to deal kindly with him, to bid him be of good cheer, to let him understand that we are also fighting a battle.