Sprightly, a newly launching startup whose founding team has an extensive history working in female-focused businesses, including Refinery29, Etsy, Chloe+Isabel, and others, is debuting its content aggregation platform on Monday, with a focus on verticals like fashion, beauty, design, decor, and more. TechCrunch has early invites (see below).

According to company co-founder Jorge Lopez, an early Etsy developer and until just recently, VP of Innovation at Refinery29, the original inspiration for the service was to build something that he describes as “a Reddit for women.” What he means by that is a system that aggregates content from around the web, which is then ranked in order to give you a real-time view into what’s currently popular.

“I love Reddit. It’s my favorite thing in the entire world,” Lopez explains. “You land on Reddit and you get the front page of the Internet. You get everything that’s important to you right then. It’s a snapshot of the world, and it’s very focused on recency.”

He then thought about the fact that there wasn’t a similar service designed just for women. (I’d argue that lots of women like Reddit, in fact, but Lopez is referring to those “traditional” female-friendly interests – fashion, beauty, home decor, etc. – the kind of categories that have led to Pinterest’s rapid growth.) 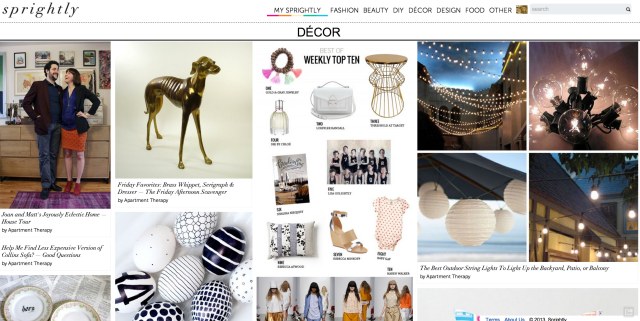 Working with Sprightly co-founder Pamela Castillo, previously of Chloe + Isabel, Fashism, Plum Alley, and Market Publique, they’ve spent a couple of months building Sprightly, which aggregates website and blog content in real-time, ranks what’s trending based on social media scores (as opposed to voting, like on Reddit), then presents users with a one-stop destination showing everything that’s popular today, as well as ways to drill down into other sections to explore even further.

If anything, the resulting product has more in common with Pinterest or Flipboard than it does with Reddit, as it turns out. Instead of user-submitted links and votes, Sprightly’s content comes from nearly 900 websites across the verticals it targets, as well as anything else a user wants to add on their own.

“We do the work for you, to some extent,” says Lopez. “We say, these are the cool blogs that we put together, but you still have the power to add whatever you think is really cool.” In the future, the plan is to allow users to follow each others lists of blogs, which is somewhat similar to Flipboard’s newly launched custom magazines, except the lists would contain the blogs themselves, not individual pieces of content. 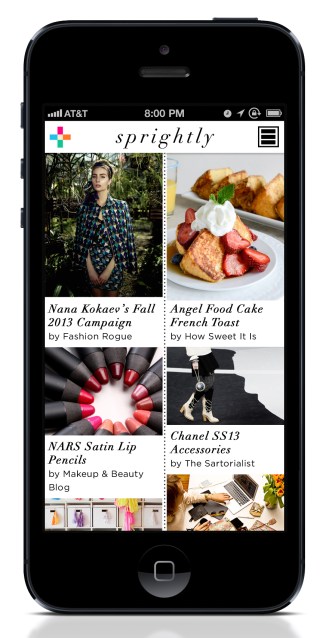 As opposed to user voting, Sprightly determines what’s trending based on social media signals, including Facebook Likes, tweets, the blog’s overall popularity, Pinterest pins, and more. And in addition to populating its own front page of what to read, Sprightly will also send users an email of the top ten things they should read today. A mobile app (pictured, right), now being built by Chamara Paul, is planned for a May debut.

The other big difference between Sprightly and its original source of inspiration in Reddit, is that the site is also heavily focused on visual imagery, giving it a Pinterest-like feel. There are some 200,000 images now indexed across its service (including animated gifs, natch). But Pinterest, Lopez explains, doesn’t focus on currently trending content, but rather popularity over time.

“We saw Pinterest the morning after the Oscars, and it mentioned nothing of the Oscars,” says Lopez. “Meanwhile, Sprightly had Oscar content through every single vertical, be it beauty, be it fashion – everything is completely based on recency. It’s like, ‘this is what’s hot right now,'” he says.

Given its overlap with Pinterest, Flipboard, Tumblr, and the like, it’s hard to say if this female-friendly aggregator will take off independently. But the founders have a history of working for startups targeting the female demographic, and it’s already very easy to lose yourself on the site for good chunks of time, which is promising. The product launching next week is a very early MVP, meant only to determine if such a thing has legs.

Users will be invited in batches, but TechCrunch readers who want to be at the head of that line can use this link to sign up: https://spright.ly/i/techcrunch. The first 100 who register will be the first to receive invites when Sprightly opens up on Monday.