Gyft, the TechCrunch Disrupt SF 2012 finalist working to bring the plastic gift card industry to mobile, is today announcing the general availability of its APIs, which allow developers to integrate Gyft into websites, apps, or other services. However, as Gyft co-founder and CEO Vinny Lingham explains, the primary focus is on mobile app developers – a group that’s interested in offering gift cards as rewards within their mobile games.

“A lot of developers out there have points, rewards, and unredeemed credits, and they want to offer a way for their users to cash out those points or credits,” explains Lingham. He suggests that Gyft is a better alternative for these developers than using bill-pay systems that charge fees for transactions.

“We’re focused on mobile,” he adds. “There are a lot of mobile games out there. It’s a huge market. And the people who already have mobile phones, playing mobile games, are going to be more open to using mobile gift cards,” Lingham notes. 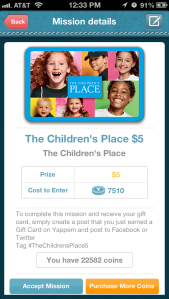 Though the in-app API integrations could help drive new customers to Gyft’s own apps on iOS and Android, customers redeeming their cards won’t have to install the Gyft app on their phone. If they choose, they can just visit Gyft on the web, login and print out their gift card from the site.

The first partner to use the Gyft APIs is Yappem, a social network for sharing customer experiences with brands and businesses. Lingham says that about 10 more integrations should go live by the end of April, and Gyft expects there to be “hundreds” more over the next few months.

This is the first time Gyft has launched a feature for developers. Until now, the startup had been working on its consumer-facing mobile gift card “wallet” of sorts, which allows users to store digital versions of their plastic gift cards, buy gift cards, or share cards with friends for special occasions, like birthdays, for example.

Gyft declined to provide details as to active users or downloads, but says it has “hundreds of thousands” of users on its service today, and has grown the stored value of its on-file gift cards to $5 million since launch six months ago. The company has also begun targeting users with free gift cards offering a small amount (e.g. $5 at Gap) to encourage users to spend with Gyft’s retailer partners. In one case, 20 percent of those who opened the card went in-store to make a purchase with the brick-and-mortar retailer. And the average spend was 4 to 5 times higher than the card’s value, Lingham says.

This is early data, of course, but as the company grows, it will work with retailers to connect with their gift card-carrying customer base, offering those potential shoppers incentives to come into the store, online or off, and make a purchase. But for now, the company is focused on product improvements and driving consumer adoption of the app – something spreading its service through the mobile gaming ecosystem could help to accomplish.