Rev.com, a freelancer marketplace founded by early oDesk employees, is today announcing $4.5 million in Series A funding led by Venky Ganesan of Globespan Capital Partners. Also participating in the round were Craig Sherman (former COO of Ancestry.com) and Austin Ligon (founder of CarMax). All three are now members of Rev.com’s board of directors, following the round which closed back in August 2012.

The company had actually been quietly operating under different branding for the past couple of years, but today it’s now publicly launching as “Rev.com.” It’s a name that co-founder and CEO Jason Chicola explains is meant to reflect the company’s focus on using technology to increase the turnaround speed on customers’ projects.

Chicola says that the idea for Rev.com was inspired by his time at oDesk, a well-known freelancer marketplace. He started the site with co-founder Josh Breinlinger, also of oDesk, but who is no longer involved at Rev.com day-to-day. (He’s currently a venture partner at Sigma West, but still sits on Rev.com’s board.)

“We saw work-from-home as a huge trend – and we think it’s barely in its first inning – but we also saw ways to do it better,” says Chicola of the original inspiration. “What we observed is that the thing that makes work-from-home tough for businesses is that it’s really hard to manage workers who are far away.”

Businesses have a tough time interacting with people who are overseas and in different time zones, he explains. There is also the hassle involved with having to select the best workers from a large pool of possible freelancers, leaving business customers unsure of what the final results will be.

To solve the former challenge, Rev.com steps in to act as middleman, managing the freelancer workers itself. And as for the latter, it focuses on screening workers in advance, and proofreading their projects upon completion. The company doesn’t let in everyone like many freelancer sites do, but instead only accepts around 10 percent of those who apply. Applicants have to pass a formal screening process involving tests indicative of the types of jobs Rev.com offers. A second pool of pre-qualified freelancers works then makes sure that the quality of these workers’ efforts remain high by proofing and grading projects upon completion.

Today, the company is focused on two areas: audio transcriptions and translations. But it’s planning to grow its services lineup to include other popular work-from-home job types in the near future. Pricing for these services is displayed on Rev.com’s homepage. (It’s $1 per min. transcription; 12 cents per word business translation; $33 per page certified translation). Rev.com takes its cut of each project, paying workers a little over half of what it charges businesses for the work performed.

Chicola explains that what makes Rev.com different from other freelancer marketplaces isn’t just the way its business is structured – it’s the focus on developing an online technology platform that helps freelancers speed up and streamline their processes. For example, the transcription product that Rev.com offers freelance workers will have special features designed for their needs, like ways to rewind the audio by a set number of seconds, tools to quickly denote each speaker’s name while transcribing, ways to create shortcuts for words that appear often or are complex terms that could be easily misspelled, and more.

Plus, he adds, “by having this transcription environment in our browser, the worker doesn’t have to download the file separately and upload it somewhere else…they can just play and go.” Chicola says its platform is about “half done,” but continuing to build out the product is one of the key things the new funding will be put towards. 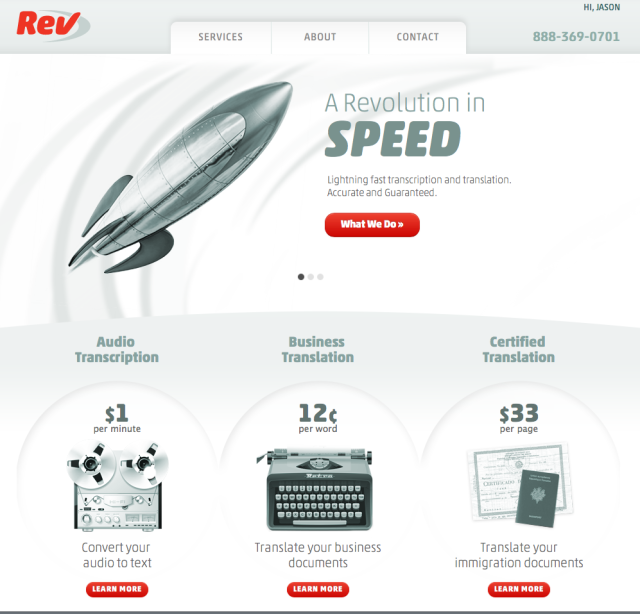 In order to attract talent, Rev.com focuses on giving workers more jobs and helping them complete those jobs more quickly, though Chicola admits that Rev.com doesn’t pay the most on a per-job basis.

“On most sites that are out there, workers spend half their time or more looking for work – that’s time they’re not getting paid,” he says. “We designed our whole system to keep them busy. If we can keep them higher utilized, they can make more money per week than somewhere else.” He also notes that at Rev.com, the goal is also to offer freelancers a “nice” place to work, where they can make friends, have a good social environment, where they think it’s fair, and where they can get recognized for their work.

Today, Rev.com translators make on average around $1,000 per month part-time, while some of the busier workers make up to $4,000 per month. Transcriptionists tend to make around a quarter of that.

As noted above, Rev.com had quietly launched its services in 2010, beginning with translations, followed by transcriptions in late 2011. These were under different branding (FoxTranscribe and FoxTranslate). During this open beta of sorts, the company grew its user base to include a combined total of around 1,000 regular business customers, including Pfizer, VisaNow (global immigration), U.S. Bank, NYU, Land O’ Lakes and Princeton University, as well as several government agencies, such as the National Park Service and U.S. Small Business Administration. On the transcription side in particular, 20 percent of its user base is the media, which uses it for transcribing interviews.

The company will continue its product development and hire additional engineers. Interested users can sign up here for Rev.com services.