Today, Google has announced a mobile refresh for Google+ for Android and iOS that includes some of the functionality that has come out for the desktop over the past few months. Both versions will be available later in the day.

Some of the changes are things that we’ve expected, thanks to acquisitions like Nik Software and features like Communities that were introduced on the desktop last year. The upcoming I/O conference should also be an interesting time for Google+, as that’s when we got its last major product edition, Events, along with numbers.

These feature updates should give you a better idea of how Google wants to weave Google+ into everything it does.

On the photo front, you can make all of your edits from within the app now, letting you crop, rotate, change contrast, saturation and brightness and add filters, all with simple gestures that might have become familiar within the Snapseed app.

The Nik Software team certainly hasn’t disappeared into an abyss in Mountain View, we’re just starting to see how important that acquisition was. The company also released a full set of professional photo tools today that Nik Software has become so popular for. 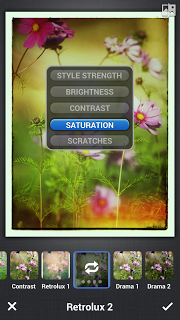 For posts, Google wants you to be able to make your way through as much content in a short amount of time. The company doesn’t want you to spend hours upon hours on Google+. Within this update, you can see more text in the original post, as well as more comments, and a single tap now takes you directly to a photo, a watch page for a video or a lightbox for a website. The really nice addition here is the ability to swipe through an entire photo album inline, without having to head over to a separate album page. Additionally, the +1, share and comment buttons are more prominent. 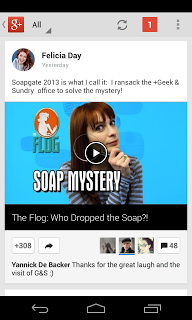 Location in your profile

Your profile on Google+ can now be adorned with your current location if you’re into that sort of thing. If you enable it, you can simply choose where you are, or where you’d like to tell everyone that you are. Without having to dig through content, the location is shown at the top of your profile. You have to turn the location settings on for Google+ to play around with this. 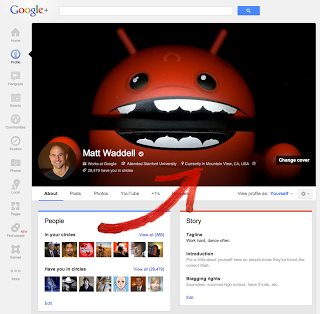 For Communities, you’re now able to tweak the “volume” of the groups that you’re a part of. That means that if a certain Community gets too noisy, you can completely stop its posts from hitting your main stream. You can now also invite people to a community or share posts from your stream with a Community directly. Finally, there are administrator tools like search, content moderation and report, remove and ban features for Community managers.

That has been a huge problem for the Community product since launching, it just had no way to be managed within the native apps. The lack of these controls in its mobile apps have probably prevented Communities from becoming more popular. 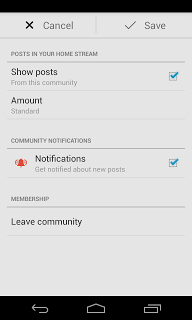 These are incremental improvements on what has become your de facto Google profile and collection of things you’ve created on all of Google’s services over the years. Now that you’ve seen integrations with Drive, YouTube and Search, you can see exactly what Google is trying to pull off here. It’s “spring cleaning” for the entire company and all of its projects. The product isn’t perfect — there are still a lot of things that Google needs to learn about the social web — but it most certainly has the platform to build from.

While many continue to draw comparisons to Facebook, because it’s the easiest story to come up with, Google+ is still something completely different. The more you interact with Google products, the smarter your experience will be with all of its products thanks to the social plumbing that Plus brings. I’ve been watching Google’s reinvigoration as a company very closely since Larry Page was installed as CEO, and Google+ has been at the center of many organizational changes and shifts in thought. Whether you consider it a “success” or “failure,” the product is not going to go away.