The news feed is getting increasingly complex. It’s evident in Salesforce Chatter, which has added a new layer to the feed for sales people to add, edit or complete deals. Unison is breaking through the added confusion of the feed by changing the metaphor and the information architecture with a new capability to leverage WebRTC.

The new business communications tool connects calls from the app across all three major platforms: in a browser as well as smartphone and desktop apps.

Unison has built a collaboration platform with a backend running on the Amazon cloud. It is architected on Riak, for high availability and data integrity. The client apps for Windows, Mac, Android, iOS and web run on a variety of platforms, as appropriate for the environment.

WebRTC is the open standard developed by Google and Opera. It makes real-time communication native to the browser. No need for stubborn plugins — apps can be built directly on the browser for a seamless experience, be it with audio, video or chat.

WebRTC with rooms is the metaphor for communication. There are no longer multiple streams running down a page, making you feel like a Matrix cyborg trying to follow along. Instead, the user interface is divided according to a room or different rooms where you are participating in conversations. 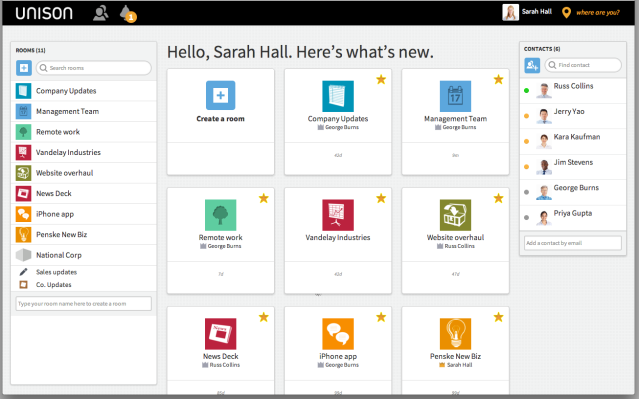 Rooms have been tried before as a metaphor for virtual groups, but they were not dynamic. Unison syncs the data so everyone can be updated at the same time whether they’re using the client or web app. People can view the rooms and a general news feed. 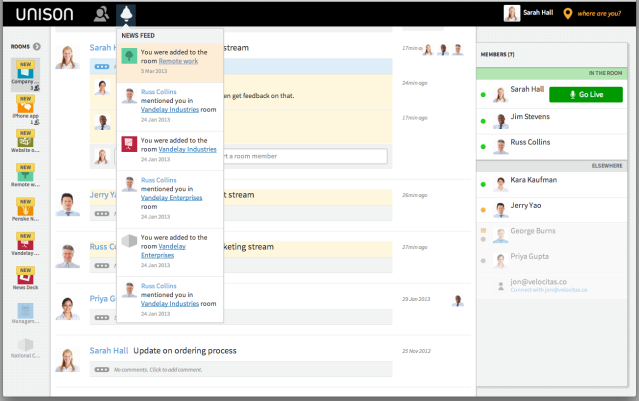 I’ve used Yammer and tried Chatter, and at TechCrunch we use Convo. All suffer from latency, which causes it to lack real-time capabilities. Yammer, Chatter and Convo all force you into traditional feeds. None of them have WebRTC. In fact, Yammer CEO David Sacks told me at SXSW that he was not familiar with it. With WebRTC, Unison has developed a real-time way for people to mix conversations over time (posts, files, comments) with real-time conversations via voice and video.

The future is the feed, but we need new metaphors to make the experience better. Unison sets a direction for the way to build an information architecture and the kind of visual representation needed to make working in virtual teams an experience that transcends the noise of traditional feeds. Adding WebRTC makes the experience richer and easier to manage.

Nonetheless, Unison is in a crowded space. Analyst Alan Lepofsky put this list together last year, showing how difficult it is to gain traction in a market that has matured to the point where almost everyone can boast some social capability.