A lot of headlines have focused on the new Galaxy S4 as a potential iPhone challenger in terms of hype and mindshare, but mobile ad firm Velti offers a different perspective in its February summary of global exchange data from its network. The company still sees iOS and iPhone dominating among mobile advertisers, despite the rising tide of Android devices.

Velti saw that 8 of 10 devices on its global ad exchange were iOS-based, including the iPhone 5, iPhone 4S and iPhone 4. Samsung managed to take two of the top 10 spots, but placed relatively low on the list with the Galaxy SII and Galaxy SIII at 7 and 10 respectively. The Galaxy SII is the only one to crack the top five in any region, coming in fifth overall in Europe, and while in general older phones ruled (there’s generally bound to more of them active out there), the iPhone managed to already crack the top 3 in Asia. That’s good news for Apple, which is focusing more attention on that region with recent launches. 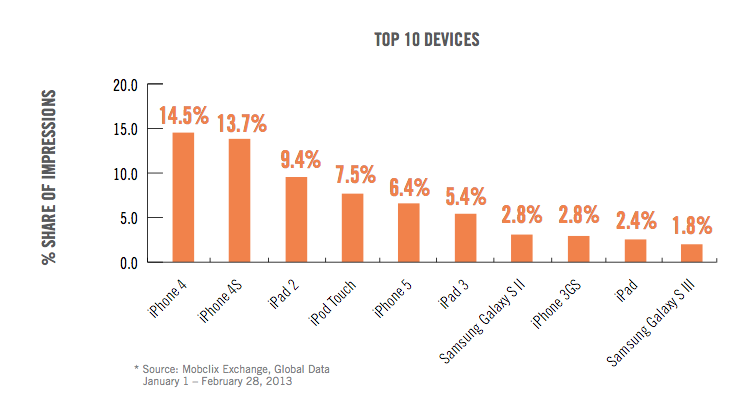 Apple’s iPhone and iPod devices ruled overall with a 38.1 percent share of Velti ad impressions, with the various iPad models making up 17.2 percent. By comparison, all Galaxy devices together only managed less than 5 percent of ad traffic in February. iOS ads were also better performing in terms of effective cost per thousand (ePCM), garnering 20 percent more than their Android counterparts. That’s in spite of a higher click through rate on Android: ads on Google’s mobile platform earned around 50 percent more clicks than those on Apple’s.

Taking tablets on their own, there isn’t even remotely any competition for iOS. Android tablets as a whole account for only 0.7 percent, according to Velti, with the iPad making up 97.5 percent, with its share mostly shifting from standard iPads to iPad minis between January and February of 2013. 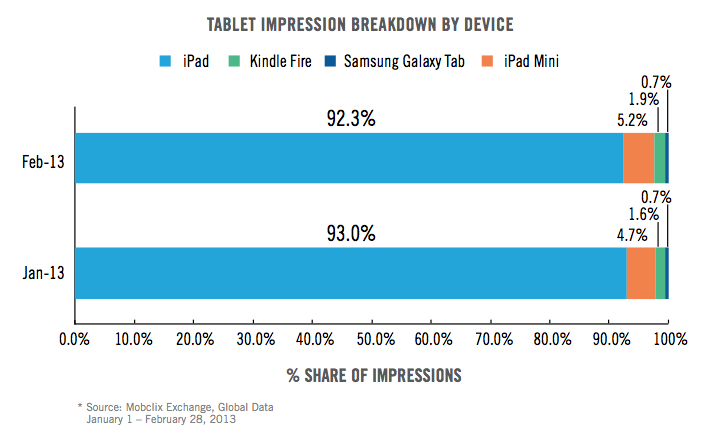 Overall, the picture on the advertiser side doesn’t look to be changing very much at all, despite Android growth in worldwide sales. iOS actually gained share between January and February according to Velti, though only a very small 0.3 percent, but the firm said that iOS has earned more than 60 percent of advertiser demand for the past six months running.

Samsung’s Galaxy S4 will be watched for a number of reasons, but it may be most interesting to see if it can help sway the needle with mobile advertisers. He who controls the spice controls the universe, after all, which in this case means that Apple’s domination of the mobile ad world definitely give it a leg up among developers and media content providers.