On the back of a new analytics product designed to help brands and others better track how well their pinned content is progressing through Pinterest’s millions of pinboards, today the image-based social network is rolling out a new redesign. This is the new look with bigger pictures and more discovery features that it first began testing back in January, with the proviso that if it proved popular it would roll it out more widely. Today, it said it would be turning it on for everyone, with invites to all appearing soon.

The main idea here is that the new look with bigger pictures and more linkage focuses on discovery, and specifically getting people more engaged and pinning on the site — engagement being one of the key metrics for social networks like Facebook and Twitter as well. The importance for Pinterest with engagement is that it potentially helps it justify further down the line how to charge for services like analytics and marketing opportunities. These are areas where currently the company does not take any revenue at the moment. As Pinterest’s Cat Lee pointed out at the time of the Analytics announcement last week, the redesign and the new marketing tools are part of a bigger continuum to improve experience for users — but users in Pinterest’s case means both regular joe/josephine consumers as well as brands and businesses.

Some of those new features include the ability for users to explore pins on someone’s board without leaving the page they are visiting, as well as more links to related pins to those you’ve already pinned. This will come by way of discovery tabs alongside the main pictures, as illustrated in the screenshot below. As Josh pointed out in January, giving users options for more content discovery right on the page where they are already has been an important lesson from the likes of YouTube, which has used this to keep users from sampling one video and then bouncing somewhere else altogether. 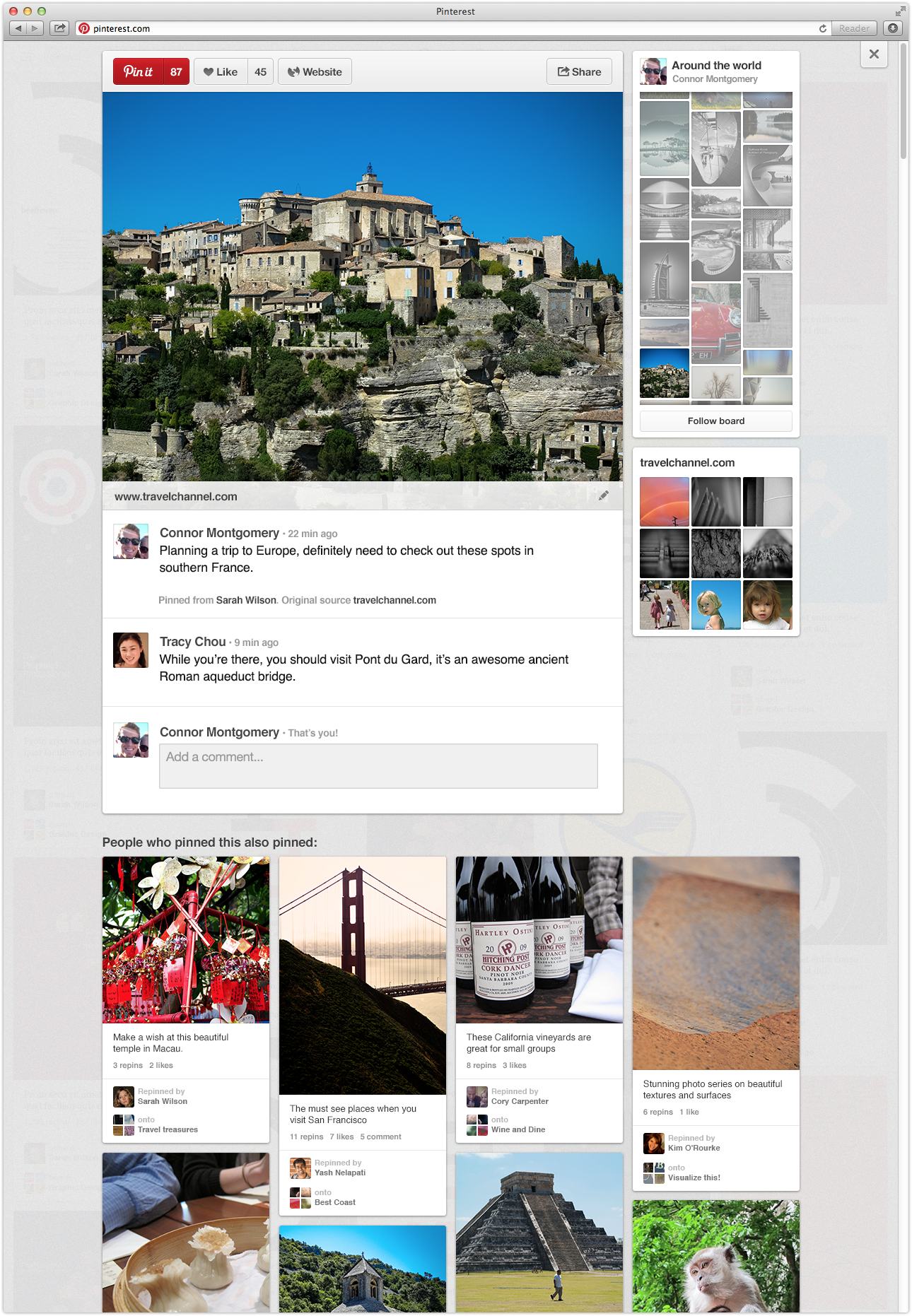 Similarly, users will be given pinning recommendations based on what other people are pinning similar to what you are flagging on your own board. Pinterest says that the recommendations feature is also soon getting rolled out to its iOS and Android apps.

Pinterest has a challenge ahead of it. As it evolves into the next stage of its life — specifically as a revenue-generating business — it will have to add more bells and whistles, which may include more forms of commerce, or ads or something else altogether. The opportunity there is obvious — one that $338 million in venture backing clearly also sees — but so is the fact that putting all that into Pinterest could take away the clean-yet-massively-full-of-information feel that Pinterest has today. Indeed, it’s telling that lead product designer Jason Wilson writes in the blog post that the basic idea is to “make things simpler and cleaner, without requiring you to learn anything new.”

Other changes, he notes, are bigger pins, better ways of navigating back through your browsing in case you start to feel lost or to engrossed in checking out other people’s boards. “Now, when you scroll through pins and click on something that interests you, the back button lands you right back where you were no matter how far you’ve gone,” he writes. This may also be something that brands and those who are trying to attract people to their landing pages as much as their individual pins may have requested. 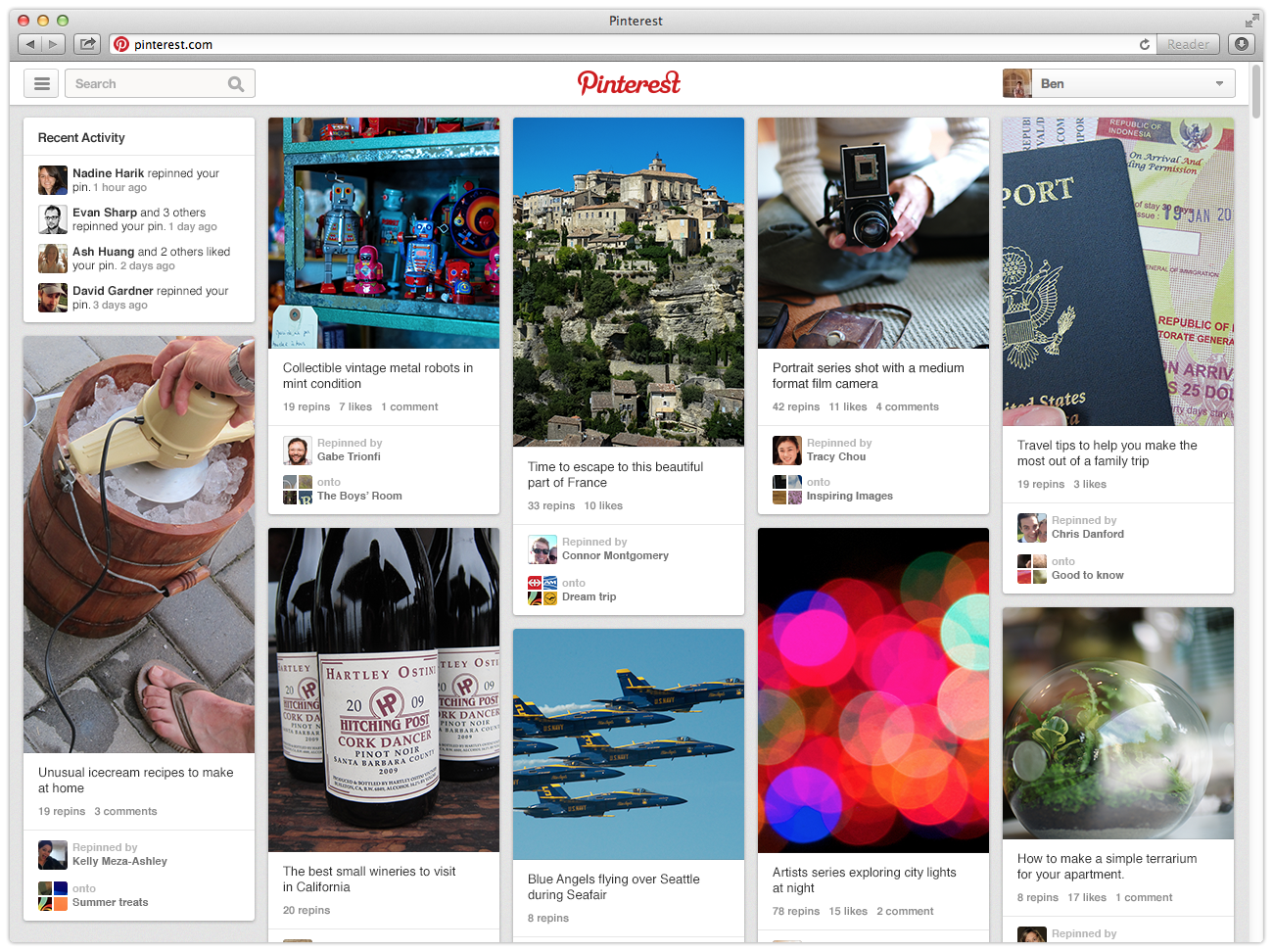