Editor’s note: Nabeel Hyatt is an entrepreneur and Venture Partner at Spark Capital. He writes about startups, growth, product development, and design on his blog. Follow him on Twitter @nabeel.

It’s no coincidence that the last 12 months have seen an explosion in human-computer interfaces (HCI). Google Glass, Oculus Rift, Myo, Leap Motion, and several others are still in stealth mode and are quickly forming the new class of companies aiming to transform our computing environments. And unlike previous generations, this new group is generating the strong public and developer support, in some cases combined with millions in pre-orders, that are necessary to have a chance at breaking through.

We’ve been talking about augmented reality, virtual reality, and wearable computing for quite some time now. When I moved to Boston some 12 years ago, it was largely because of the MIT Media Lab, a hub of innovation that was focused on that crazy mixture of art and technology that they rightly believed would lead to the next stage of computing. 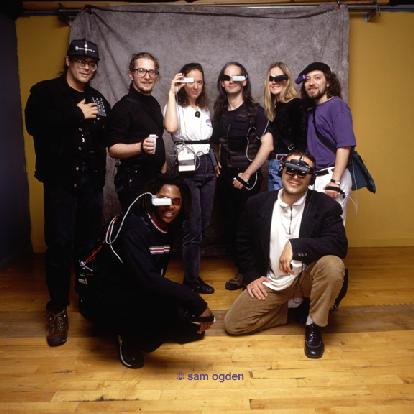 While it was a fruitful era for ideas, and wonderfully geeky photo opportunities, it was a failure for a new generation of global companies. There were advances thanks to eInk, Harmonix, Color Kinetics, Ambient Devices, iRobot, and others, but there have been no truly iconic companies – the Apples and IBMs – that the first generation of computing created. More importantly, our experiences with computers stayed largely the same.

So what has changed that may make things different this time? Two small things, and one big thing.

1. Technology. Core components, from accelerometers to displays, that used to be expensive and custom, are becoming commodities thanks to cell phones. Leap Motion, for example, hugely benefits from the hundreds of millions of cameras embedded in cell phones every year that have drastically reduced their price points.

2. Pitch and design. With any startup, getting people to believe is the hardest thing, and it is doubly hard when you are pitching a new category of experiences. Thanks to many factors, from 3D printing to the video demo culture pioneered by Kickstarter, companies are learning how to make a broad market message of beautiful design and ease of use at their earliest stages.

3. Culture. Sometimes the timing is just right culturally. While much of the technology involved here is difficult, it is not unique to this time and place. I believe the current wave has as much to do with the last generation of gaming consoles and cellphones than about cheaper components or a slick video.

That may sound strange, but I believe it was Nolan Bushnell who said that every great technological advancement starts out seeming like a toy.

The first commercial peripheral to use your body was the Nintendo Power Glove back in 1989. It was a commercial failure, selling 100,000 units, grossing under $100 million, and driving the parent company into bankruptcy. It was geeky fun kids stuff, but the product wasn’t awesome.

Fast forward and the picture of the advances in HCI is much more like this.

The last five years have seen the sale of 120 million Wii’s, the widest-selling game platform in history. It has seen unique interfaces such as Guitar Hero and DDR used to create powerful, even transformative, experiences. It has seen the Xbox Kinect sell 8 million units in its first 60 days, making it the fastest-selling consumer electronics product in history. And of course it has seen the Apple iOS devices introduce the world to flicking angered birds on touch interfaces.

In that context, the last five years starts to feel like it was softening the ground for a mainstream populace to accept new inputs. All of these advancements haven’t just taught people to stand in front of their televisions or tap away at their screens. It is teaching people to expect more out of interacting with their computers.

And that’s enough to make one very optimistic about the next five years of computing and the hardware startups that will be building it.