Back in January, Backed or Whacked looked at three crowdfunding projects that were aimed at getting novel takes on bicycles off the ground, or at least on the ground. But not every crowdfunded bicycle project involves reinventing the wheels. In fact, bike accessories have been such a popular target for crowdfunding efforts that they’re fertile ground for a two-part look, this first one of which covers smaller clip-on and snap-on accessories. Feel free to ascribe them symbolically to each wheel as you see fit. 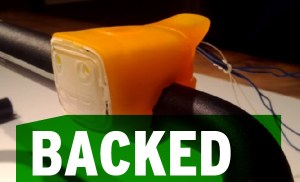 Backed: Orp Smart Horn. Thankfully not a bike horn controlled by your smartphone, the smart horn, or “smorn” as no one will call it, is the brainchild of Tory Orzeck, or “Torzeck” as he likely doesn’t like to be called. While the portmanteau may sound whimsical, the smart horn addresses a serious issue. Bicycle riders are relatively invisible and inaudible at night, particularly when riding to the right of a vehicle looking to make a right turn at an intersection. Thus, the Orp, which wraps around a bike’s handlebar, combines a bright LED headlight with a piercing 96 dB horn that Orzeck claims is similar to a Vespa’s horn in practice. A softer 76 dB mode is also available, so you don’t need to scare the pedal pushers off pedestrians who meander into the bike lane.

Over 1,500 backers supported Orp, with the most pledging in the $45 and $55 tiers to put a lot more cannon in their Cannondale. The smart horn is due to ship in September. Especially till then, let’s be careful out there. 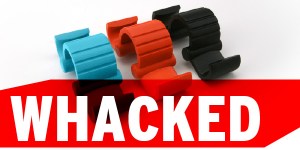 Whacked: Bag Buddy. New York industrial designer Nicholas Fjellberg Swerdlowe spends a lot of time with his bicycle, heaving it up and down stairs and taking it to the grocery store. There, he invariably picks up too many ecologically indifferent plastic shopping bags to carry home on his two-wheeled steed. His entrepreneurial epiphany to deal with the baggage in his life was the Bag Buddy — a small hard piece of rubber flanked with two hooks designed to carry food and whatnot back home. Fully loaded Bag Buddies look practical if a bit silly. Swerdlowe articulates three main Buddy benefits mostly related to the placement of the bags — safety, maneuverability and decreased risk of wheel pinches. Unfortunately, less than $4,000 of the requested $20,000 for this “necessary accessory” was collected and so for now the Bag Buddy has been bagged, buddy. 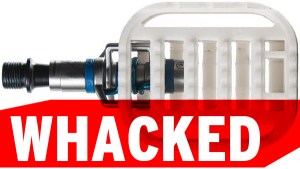 Whacked: Pub Pedals. Like the equally alliterative Bag Buddy, Pub Pedals are simple appendages that cover part of the bike to increase its usefulness. In this case, the slip-on pedals are intended to slide securely on to a certain brand of pedals called Eggbeaters, which are designed for mountain biking but are challenging to ride on with ordinary footwear. Pub Pedals, however, make them more suitable for transport to the pub or presumably even destinations where one might not become inebriated.

In its Indiegogo campaign, Pub Pedals collected just over 8,000 of 20,000 Canadian dollars requested. However, this “whacked” campaign has a happy ending. Taking advantage of the site’s Flexible Funding option and about $10,000 in offline contributions and preorders, designer Jeff Thom was able to get close enough to push ahead and Pub Pedals are now available for preorder for that person in your life looking for a way to beat the Eggbeater for less-demanding terrain.