I’m watching the live stream of the Samsung Galaxy S 4 launch event in New York, and I cannot stop laughing.

In theory, illustrating different features of your new phone using real-world scenarios isn’t a terrible idea. And if you must hold your event at Radio City Music Hall, why not get theatrical? But what’s impressive here is how the skits are both terribly written and unconvincing (like, maybe intentionally so because that makes it better?), and yet Samsung is really committing to them — actors get played on and off with cheesy music, and there have been several dance numbers.

A sample joke: “Our family videos look like a movie about a single mother” — followed by an awkward product explanation.

Right now, I’m watching host (and Broadway actor!) Will Chase wearing an apron while actresses pretend to throw a fun bachelorette party. Naturally, they’re adding a few gratuitous mentions of the new phone as they dance. Earlier, we got to see Chase pretend to negotiate with his agent, with jokes about percentage points. And yes, there was a cute kid who was fawned over by other cast members, tap danced, and shouted, “I WANT FISH EYE!” 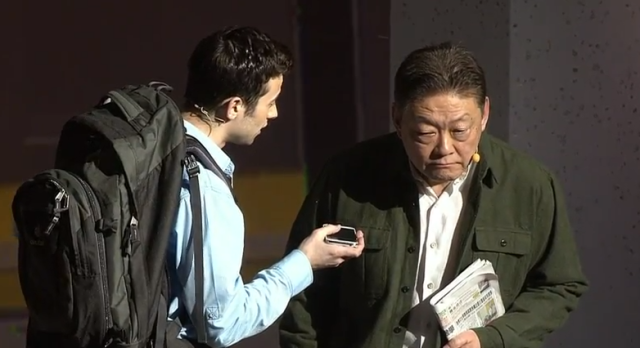 The real highlight for me, however, was a segment illustrating the S 4’s translation capabilities. A young actor was transported to Shanghai, where he tried to get an elderly Chinese gentlemen to give him directions. The problem, as loudly explained by Chase: “The old guy doesn’t speak English!” Afterward, in case you didn’t understand the skit, Chase helped out: “Then the old guy answered in Chinese and the S 4 typed it out in English!”

That was the moment when my snickers turned into loud, disbelieving laughter, and no amount of sophisticated translation technology or fish eye lenses could make me stop.

So, this is weird, right? #GalaxyS4

If you want to relive the magic, the skits start about 57 minutes into the video below.