The end of Google Reader is just a few months away, but RSS, the protocol that makes Reader and many other news readers tick, is alive and well. With its Qrius syndication service and the web and mobile news reader Taptu, Mediafed wants to help independent publishers to increase their distribution and make subscribing to news feeds easier. Currently about 130 out of the over 2,000 premium publishers that use Mediafed to monetize their feeds use Qrius. Starting today, the service is also open for independent bloggers who want to use it on their sites.

Besides making news feed subscriptions easier, Qrius also includes a number of social features that allow users to share feeds directly with their friends on Facebook, Twitter and by email and SMS. Mediafed also plans to work with premium bloggers to help them monetize their feeds.

Given that Mediafed also owns Taptu, the two are closely linked together right now, but as Mediafed CEO Ashley Harrison told me earlier this week (before Google made its announcement), the company is also planning to support other readers in the near future.

After publishers install Mediafed’s code on their sites, users only have to click the Qrius icon and sign in with Facebook, Google+ or Twitter. They will immediately be subscribed to the site’s feed in Taptu. Qrius, the company hopes, will bring “a social and mobile approach to news feed syndication that RSS has always been missing.” 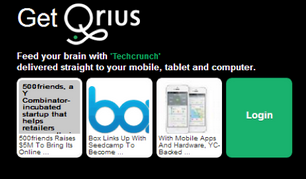 The timing of this announcement probably couldn’t have been any better, given that RSS is suddenly in the news again and that many people are looking for a new news reader. When I talked to Harrison about the Qrius news earlier this week, our discussion also turned to RSS in general. More than 90 percent of the Internet audience today doesn’t use RSS feeds, Harrison told me. In his view, that’s at least partly because nobody ever really ‘mentored’ RSS. Indeed, just the word RSS means almost nothing to mainstream users.

“We can’t escape the fact that RSS has limited usage,” he told me. “If we are going to be a global player and we think RSS is a very good protocol, we got to mentor it. Nobody ever mentored RSS and said: let’s take it to the next stage.”

So far, Mediafed’s focus has mostly been on premium publishers, and the company currently has about 202 million users who use its partner’s feeds.

To put the decline of Google Reader into perspective, Harrison provided me with some stats about the role of Reader in the Mediafed ecosystem. In 2011, the company saw 47 million active users, and 16 percent of those were using Google Reader. Today, it has 202 million users and just 8 percent use Google Reader. The total number of Google Reader users in its network has clearly increased, but its relative importance in the RSS ecosystem was clearly on a downward trend over the last few years.

Overall, Harrison doesn’t expect that the Google Reader shutdown will have a negative effect on Mediafed’s bottom line. “We expect these RSS subscribers who are typically power users to find alternatives. Ultimately they are reading our feeds and will find another platform to migrate to and continue their news feed consumption.”