Facebook already has tagging for people, Pages, and location, and could soon allow users to tag their posts with hashtags so they could be more easily indexed and surfaced by Graph Search. A source told TechCrunch that Facebook was working on the project, and soon after The Wall Street Journal reported similar news.

However, this feature may be a ways from fruition. It will likely require Facebook to add posts to what’s searchable with Graph Search. Right now Facebook’s internal search engine only returns people, places, Pages, apps, media, and interests. Facebook did say that search for posts would launch eventually though, and hashtags could make the feature even more useful.

Without them, finding posts about a popular topic could require people to deduce the exact terms used to describe it. By implementing hashtags, anyone who wanted their posts surfaced better by Graph Search could add a hashtag to their post, and Facebook could help searchers find the tag related to what they’re looking for. When clicked from a post in news feed, the hashtag would presumably open a page of Graph Search results of mentions of the hashtag, similar to Twitter.

Hashtags would also allows brands and events to better coordinate buzz on Facebook. They could ask people to include the hashtag when referring to a brand’s event or marketing campaign. Facebook could then display in the news feed any hashtags mentioned by multiple people in your network. Advertisers might be happy to pay to appear in search results for hashtags related to their businesses as many do on Twitter. Mark Zuckerberg confirmed that sponsored search results would be a natural way to monetize Graph Search.

Along with hashtags, a trending topics list could potentially come along with post search for Graph Search. 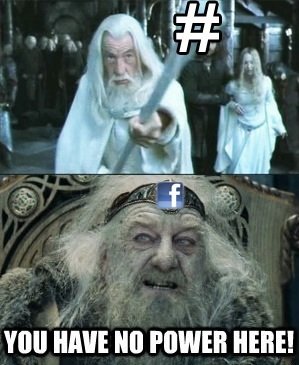 There’s a big issue with hashtags on Facebook, though. Unlike Twitter where most posts are public, on Facebook most have some level of privacy. Clicking a hashtag would therefore only be able to show you public posts and those set to be visible to you that mention the tag. One option would be showing the content of private posts but not their authors, though this would likely be met with backlash.

Figuring out how to operate hashtags and trending topics will be a sociological challenge for the world’s most popular social network. Done right, they could reveal the zeitgeist of opinion on Facebook. Done wrong they could make people wary of adding that little pound sign to posts. But until Facebook launches Graph Search for posts, hashtags have no power on Facebook.