BlackBerry issued a press release today that amounts to little more than “Look! We’re selling handsets!” The four paragraph release hit the wire at 3:17 ET, and shares (which had been down on the day on the NASDAQ) shot up immediately afterwards. BlackBerry provides no details about who placed the order or why, noting only that it’s the single largest purchase order for the devices “in history.” They ended the release with a reminder that BlackBerry’s fiscal 2013 fourth quarter earnings results will be reported in two weeks time.

BlackBerry® (NASDAQ:BBRY)(TSX:BB) announced today that one of its established partners has placed an order for one million BlackBerry 10 smartphones, with shipments starting immediately. This order marks the largest ever single purchase order in BlackBerry’s history.”An order for one million devices is a tremendous vote of confidence in BlackBerry 10,” said Rick Costanzo, EVP Global Sales, BlackBerry. “Consumers are ready for a new user experience, and BlackBerry 10 delivers. With strong partner support, coupled with this truly re-invented new platform, we have a powerful recipe for success.”

So, to recap: BlackBerry says ‘Here’s a wildly sizable order we got, with no real information provided (and no timeline for the delivery of the order, either), at a crucial time for our company when stock was slumping based on a dip after an earlier surge about acquisition rumors, ahead of quarterly results which will almost certainly be disappointing because they don’t yet represent and incorporate the launch of our new platform.”

BlackBerry told us via an emailed statement that they can’t reveal the identity of the buyer due to confidentiality agreements with the partner.

The release itself was pretty hilarious, but the chart of what happened to stock price immediately following the news is even better: 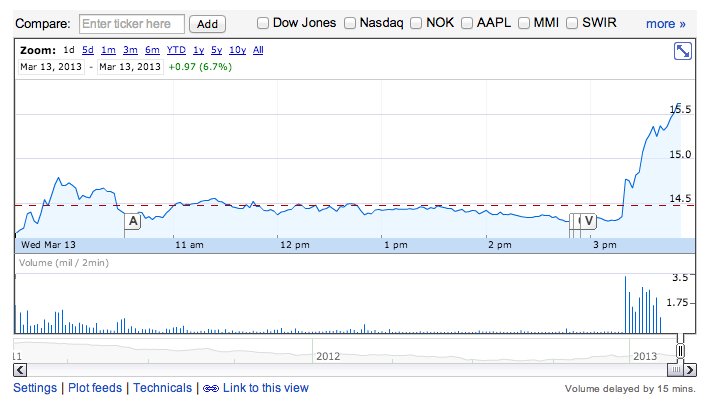 The jury is still out whether Blackberry is simply whistling past the graveyard here or if the nascent trend of major buyers upgrading their BB fleets (and bolstering the stock) will hold.