New Relic has launched a new service for monitoring the performance of native mobile apps that the company claims can better track customer reviews on the iOS and Android app stores.

New Relic for Mobile Apps visualizes in real-time how an iOS or Android app is performing across services such as Facebook, different operating systems and in the any other variety of ways an app can be affected as it is used.

The service works like this: A developer logs into the New Relic SaaS app and can view the options that provide the capability to track the interactions associated with the app. Developers can also see the already existing features that allow for monitoring app performance across the browser or on the server. 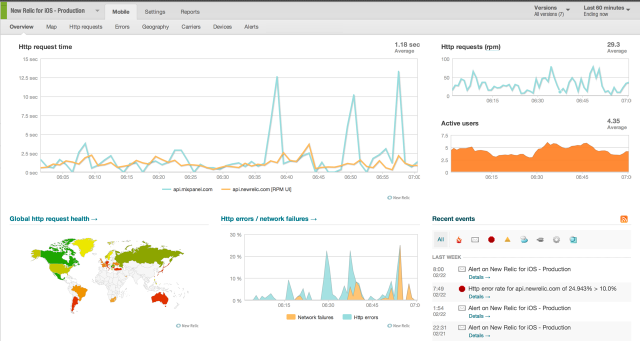 Lewis Cirne, founder and CEO of New Relic, said that, until now, a developer measured the performance of an app by customer ratings. For example, developers now wait for the app to go live in the Apple App Store to determine if customers like it. If developers get a lot of one-star ratings, then they know there is an issue and they start the long slog through the logs to see if they can find the problem.

“So what we’re doing is helping them prevent low ratings due to performance issues,” Cirne says. “If the app is fast, functional and available, the chances of getting a low rating decrease substantially.”

The new mobile service has free, standard and enterprise offerings. The standard version starts at $29 per month. Enterprise solutions are individually priced.

According to a report by Portio Research, the mobile app market is projected to top 89 billion downloads by 2015, with half of all payments transacted via mobile by 2020. So it is no wonder that competitors, such as AppDynamics are promising similar native mobile app offerings of their own. The question for me is how software on a physical server, designed to monitor legacy enterprise tools, can compete against a service that is registering every event on a mobile device.

I only come back to what I hear from people across the market. The guts of the enterprise data center is turning into data, optimized through code on thousands of servers. An on-premise solution can match a SaaS in only so many ways. Data rules the day. And it’s the cloud that serves as the place to manage it.