The idea of RSS was one that never quite gripped with normal Internet users. Sure, for us geeks who absolutely love consuming as much information as possible, RSS is a wonderland. When Google launched Reader in 2005, I can remember surfing to all of my favorite sites and looking for that little RSS logo, clicking on it and subscribing to the feed. So easy, so awesome to “us,” and so not easy or awesome to anyone else on the planet.

I’ve heard many smart people try to explain RSS to normal folks, such as “turning content into television stations, allowing you to subscribe only to what you want to consume.” That one didn’t work. Neither did any other explanation, because RSS as a technology is too nerdy, too behind-the-scenes and lacked general consumer appeal. Nobody ever took RSS under its wing and “mentored” it.

In essence, Twitter is a big RSS reader, allowing you to “follow” the people sharing content that you’d like to consume. That simple concept of following gripped, but subscribing to feeds simply did not, at least how Google Reader and other popular readers let you do it.

What has taken off are apps like Flipboard, which have a beautiful interface that allow you to do the same thing that Google Reader let you do, except that it’s sexy. Shoot, even Google tried to copy Flipboard by launching a product call “Currents.” Ever use it? Me neither.

Why is Google Reader dying and RSS not so interesting? Because people don’t want to read news like this, and it never evolved: 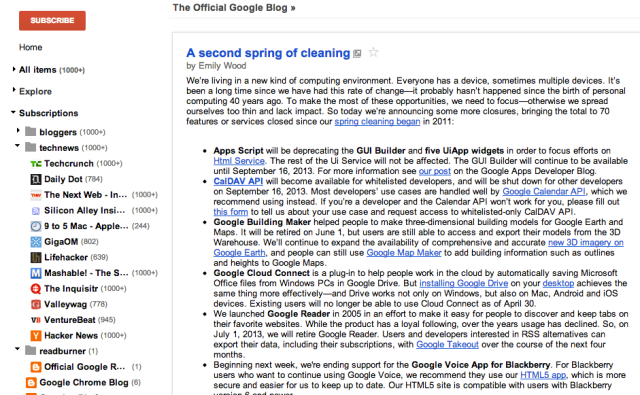 Google Reader was just a glorified email inbox. Sure, you could skim news quickly from your favorite blogs, but it lacked any other wow factor for people that actually matter. Additionally, it was nearly impossible to monetize, as the same argument about ads in RSS feeds would get the same three geeks angry each time. Ask FeedBurner.

Who is going to tell the normal people that RSS is dead?

Who is going to explain to normal people what RSS was?

There is a pretty sizable pocket of people like us who are upset at Reader’s demise, but since none of us could ever explain what RSS was – why someone should use Google Reader and how to advance a boringly old technology – it’s dying. Nobody cares that Google Reader is dying, because nobody cared enough to keep it alive. The funny thing about technology is that apps and sites pick up traction after early adopters get to it first. It’s these geeks that brought apps like Instagram to the masses, calling it fantastic and amazing.

Nobody ever did that for RSS or Google Reader, so this is what happens. The sad day for Google Reader came a long time ago, such as the fact that I haven’t logged into it for three years. The only reason why I logged in today was to grab these screenshots. 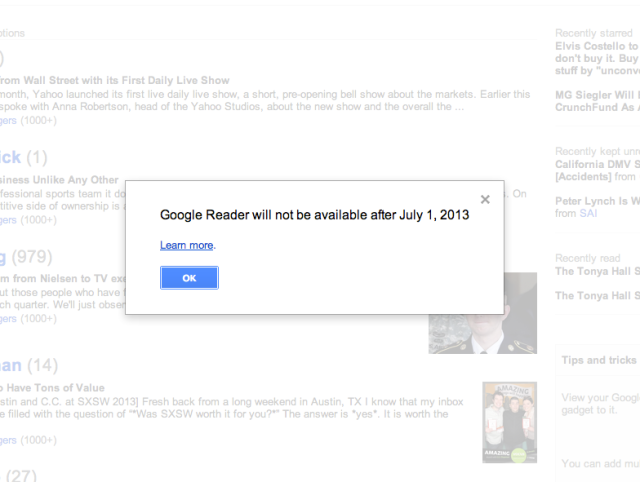 Thanks to Twitter, Flipboard and Facebook, I have more content than I can shake a stick at. I don’t want to read every single thing that WIRED writes, I want to read the things that people I know think are awesome. Google Reader never did that for me, so it must go.