Google has opened applications for its third annual Google Earth Outreach Developer Grants. The program provides $10K-$20K of funding to nonprofits that are willing to use Google’s Map technology to help them accomplish their goals.

The company has used its own technology to help out during times of crisis, most recently and notably during Hurricane Sandy and the flu outbreak in the U.S.

Google Earth’s Tanya Birch wrote about the program on the Google Maps blog this afternoon, outlining some of the previous successes the program has helped shape. Some of the issues addressed with map technology in the past include environmental issues, humanitarian causes and disaster-relief prevention.

One of Birch’s favorites from the 2011 batch is a project by WWF called “Eyes on the Forest.” Its map tracked deforestation in Sumatra, which helped convince 17 U.S. retailers to stop buying toilet paper from companies that cut down wood in rainforests and tiger habitats that are labeled as critical. This is an example of a technology platform helping to tell a story that will then go on to make a case for a non-profit’s mission. 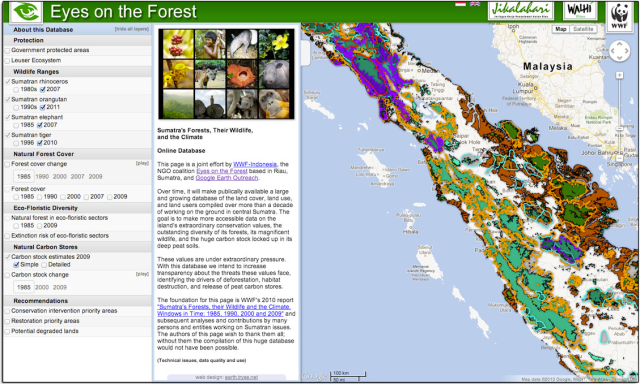 Google has quite a few of these programs, and we’re not always updated on how the grants do once they’re given. It’s nice to see the fruits of their labor this time, as it’s easy to come up with great ideas on paper but never follow through with them.

One other project mentioned by Birch was done by HALO Trust, which clears minefields in areas of the world that have been ravaged by years of intense war. These undetonated mines devastate small towns and unsuspecting children who are merely trying to farm their way around the countryside or head home to their families from work. This particular project, with a grant from Google, targeted Angola, Afghanistan and Cambodia.

If you’re a nonprofit and could use Google’s mapping technology to help tell your story or solve complex social problems, then it’s worth submitting an application. If you’ve done so, please reach out to us and let us know what the process is like. We’ve never heard that side of the story.